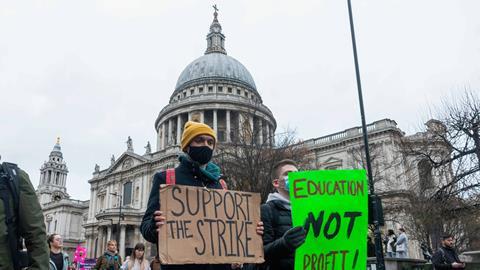 The majority of staff at the UK’s higher education institutions are demoralised and considering leaving academia altogether, according to a new report from the University and College Union (UCU). The findings come from a survey of almost 7000 UCU members working across 100 institutions.

Long-running disputes around pay, pensions and working conditions have seen several waves of strike action at UK universities in recent years, with thousands of researchers currently taking part in a third walk out since December. According to UCU, 70,000 academic staff are on insecure, fixed-term contracts, while pension cuts and work overload have contributed to a ‘crisis of morale’ for the UK’s academic workforce.

The UCU report highlights high levels of dissatisfaction among university staff, with 57% of survey respondents saying they are ‘unhappy’ about spending the rest of their career in higher education and a staggering 88% stating that they have ‘no optimism’ for the future of the sector.

Two-thirds of UCU members say they are considering leaving the higher education sector in the next five years, with three-quarters of those in research roles saying they are ‘likely or very likely’ to leave academia.

81% of the youngest staff said pay and conditions were forcing them to consider leaving the sector, while survey respondents aged over 60 were the most likely to leave their positions over recent pension cuts. ‘I think this should be of serious concern to those leading the sector,’ UCU’s general secretary Jo Grady told a press briefing ahead of the report’s launch. ‘They are simultaneously driving away people towards the end and the beginning of their careers in higher education. Without action, this could really cut the legs from under the entire higher education sector.’

As well as calling for action on the issues of pay, pensions and insecure contracts, UCU wants Westminster’s education committee to launch an inquiry into the morale and wellbeing of higher education employees. It also wants governments in England, Wales and Northern Ireland to follow the example set out in the Scottish Higher Education Governance Act that ensures staff and union representation on universities’ governing bodies.