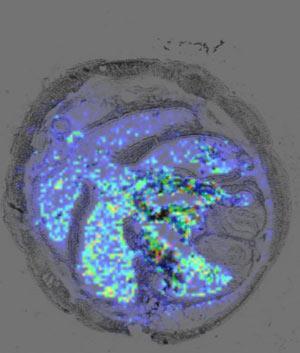 A unique group of compounds enable earthworms to digest otherwise inedible plant material, researchers in the UK have discovered. The compounds protect the earthworms against toxic plant polyphenols and help them return carbon to the soil.

When earthworms come to the surface, they grab fallen leaves and drag them into the soil where they eat them. In the process they free the carbon locked in the leaves and return it to the soil in a process known as organic matter mixing, which is known to improve soil fertility. However, to ward off herbivores plants produce polyphenols that cause soluble proteins to precipitate out, which can inhibit enzyme activity. As a result, animals have had to develop defence mechanisms to digest plants, but the particular mechanisms employed by invertebrates have remained poorly understood.

Now a team from Imperial College London has found that previously unknown compounds in the earthworm gut reduces this polyphenol-led precipitation of proteins and, therefore, counteract the toxic effects. The researchers have named the chemicals drilodefensins from megadrile, the group the worms belong to. Drilodefensins are ubiquitous and it is estimated that for every person on the planet, there’s at least 1kg of the compounds. The researchers suggest that if earthworms had never evolved to produce drilodefensins, fallen leaves would remain on the soil’s surface, disrupting the carbon cycle and making the countryside unrecognisable.

The drilodefensins behave in a similar way to surfactants