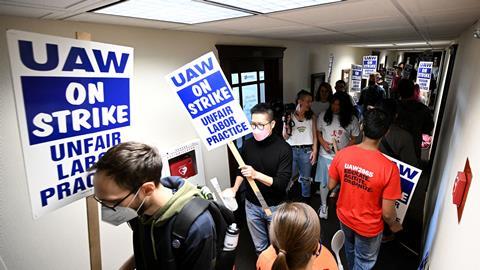 An unprecedented 40-day strike by tens of thousands of academics at the University of California (UC) system and Lawrence Berkeley National Laboratory over pay and working conditions was resolved two days before Christmas. The new contracts for academic researchers and postdoctoral researchers run to 30 September 2027, and those of academic student employees (ASEs) and graduate student researchers (GSRs) will be in place through to 31 May 2025.

The walkout was the largest academic strike in US history. It froze research and many teaching activities across UC’s 10 campuses and the Lawrence Berkeley National Laboratory, which together account for more than 8% of total US higher education research expenditure. These institutions are home to about 10% of the country’s postdocs.

Unions representing UC postdocs and academic researchers, which together represented about 12,000 of the university’s 48,000 workers who had taken to the picket lines in early November, reached agreement with the university system and returned to work on 12 December. Under the new five-year contract UC postdocs get a 20–23% raise, followed by annual pay increases of at least 3.5%.

The lowest paid postdocs in the university system had earned $54,500 (£44,860), but they are all expected to be paid more than $70,000 by the end of their contracts. Meanwhile, the typical academic researcher at UC should see annual salary increases that will reach 29% over the five-year period.

The new contracts for UC postdocs and researchers also include protections against abuse and bullying in academia, additional safeguards for disabled workers, and improvements in paid parental and family leave – with full pay for eight weeks leave beginning in 2023.

Despite significant gains for postdocs and researchers in mid-December, 36,000 ASEs and GSRs were still trying to reach a deal with the university. That standoff ended on 23 December, after unions secured a two-and-a-half year contract that included a 7.5% salary increase for teaching assistants (TAs) and associate instructors, and an 8.9% raise for teaching fellows.

By 1 October 2024, the lowest salary for a TA at UC Berkeley, UC San Francisco, and UC Los Angeles will be $36,500. In addition, associate instructors and teaching fellows within the university system will receive a 16.7% salary increase.

Most GSRs will now see 10% pay increases in the first year of the contract and 6.4% increases in each subsequent year. By 2024, new GSRs contracted at half that of a full time employee will be earning $34,500, although they nearly always work far longer than contracted. The terms of the new contracts guarantee that wages will rise significantly for all these UC employees, and by up to 80% for some of the lowest paid, the unions said.

UC employees will now also receive eight weeks of paid leave per year to cover serious health conditions and family care, on top of childcare reimbursement and subsidised transport. Experts suggest these developments in California could reform higher education throughout the US and beyond.

‘In response to the union’s proposals and following the university’s evaluation of other top research institutions across the country, UC has restructured and enhanced its support packages to better align with similarly placed institutions of higher education,’ explained UC’s office of the president in a statement. ‘These enhancements reflect the important role that these student employees play and the university’s dedication to support its graduate students as they obtain their master’s and doctoral degrees.’

Ray Curry, president of the United Auto Workers (UAW) through which the UC workers negotiated with UC, called the new contracts ‘a tremendous victory’ for UAW members, as well as for ‘all academic workers’. Mike Miller, who directs the UAW region that includes California, is similarly enthusiastic. ‘These agreements set a new standard for institutions of higher education across the US,’ he stated.

Miller said unions make sense for academic workers because issues like low pay, unstable benefits and inequitable working conditions aren’t going away on their own. ‘We look forward to building on the strength of these new contracts to improve the quality of life for every worker at UC and other universities,’ he added.

The issues go beyond the US. In late November more than 70,000 academic staff at 150 universities in the UK went on strike for three days over similar concerns about inadequate pay and working conditions, as well as pensions.