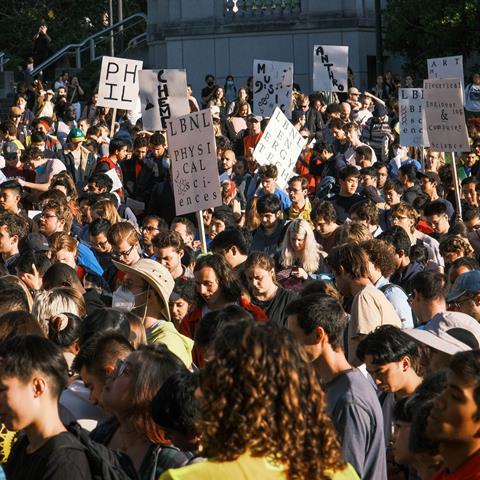 Union plans to continue the strike until a deal is reached

Nearly 50,000 academic researchers, postdocs, graduate students and teaching assistants at all 10 campuses of the University of California, US, and Lawrence Berkeley National Laboratory are set to begin a massive strike today over what they deem unfair labour practices related to insufficient pay, rights and benefits.

‘We have been bargaining throughout the weekend, and while important progress has been made, we are still far apart on many of the issues that will make UC a more equitable university,’ said Rafael Jaime, a PhD student at UC, Los Angeles, and president of the United Autoworkers Union (UAW) 2865, which represents 19,000 student workers.

On the evening of 2 November, more than 75% of the 48,000 UC employees voted to strike after months of unsuccessful bargaining with UC, the largest employer in California. With $5.4 billion of funding, UC accounted for 8.6% of total research expenditures at all US universities in 2018/19. 10% of postdocs in the US work at one of the 10 UC campuses.

The strike will have ‘a humongous impact on the research progress in the state and at UC’, warns Lexie McIsaac, a UC Berkeley postdoc in computational chemistry. ‘Labs are going to cease to function, there are going to be entire research grants that have no progress being made on them.’

‘I’m paying half of my income in rent’

UC teaching assistants and graduate researchers are paid as little as $21,000 (£17,828) a year. UAW is proposing $54,000, according to UAW member Tanzil Chowdhury, a materials science and engineering graduate researcher at UC Berkeley and Lawrence Berkeley National Laboratory.

The salaries of US postdoctoral researchers are tied to the US National Institutes of Health’s payscale, which starts at slightly below $55,000 and goes as high as about $65,600 for those with seven or more years of experience. However, the union organisers are calling for the UC postdoc pay floor to be at $70,000. ‘I’m paying around half of my income in rent, and with inflation and everything, it’s harder to live off the stipend than I was expecting,’ says McIsaac.

UAW is also seeking a salary increase of 14% for academic researchers, along with annual cost of living and experience-based adjustments. ‘Academic researcher’ can mean very senior academics who run their own labs as well as those who are just starting their careers. UC pays some people in this category as little as about $20,000 and others as much as $65,000, according to union organisers. 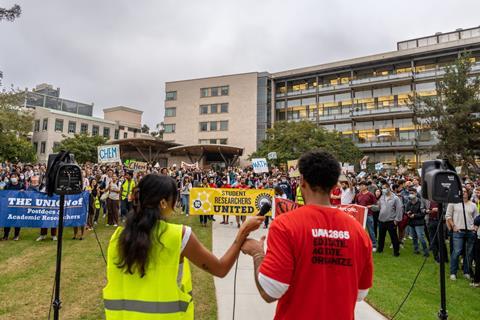 Beyond salary increases, UAW is also asking for better commuting and childcare benefits, on top of greater job security, equity for international scholars and more rights for disabled workers.

However, UC says things are under control. ‘Our campuses have been preparing to mitigate the impact of any strike activity on our students by ensuring, to the extent possible, continuity of instruction and research,’ the university wrote in a statement sent to Chemistry World. ‘Additionally, campuses will be prepared for contingencies should a strike interfere with the conclusion of the academic term.’

The university noted that its ‘offers of fair pay, quality health and family-friendly benefits, among other proposals, are fair, reasonable and responsive to the union’s concerns’.

But the unions are not satisfied. ‘We’ve been making pretty slow progress in our negotiations with the university – they’ve been bargaining in bad faith and literally breaking labour laws, which has made it pretty hard to come to an agreement on most issues,’ McIsaac says. She and other postdocs have been bargaining with UC for almost a year and a half.

The UAW accuses UC of breaking labour laws more than 25 times during the negotiations. For example, McIsaac recounts that UC had long rejected demands for commuter benefits such as subsidised public transport tickets. But then, the university quietly supplied about one-quarter of UC Berkeley graduate students with free passes to the local subway. ‘If there’s an ongoing negotiation over that specific issue, they can’t just go around and try to give some people that benefit but not others,’ she says.

Tarini Hardikar, a graduate student in theoretical chemistry at UC Berkeley and part of UAW’s bargaining team, says UC keeps stalling progress on negotiations. ‘They are making unilateral changes in areas that should be decided collectively in a bargaining session, they are withholding critical information from us that’s preventing us from bargaining and they’re all just dragging the process out,’ she says. ‘The status quo benefits UC.’

Those negotiating on behalf of UAW say UC is unable to compete with its peer institutions and could haemorrhage talent. Stanford, Columbia, Princeton and the Massachusetts Institute of Technology all pay significantly more to their chemistry graduate students than UC Berkeley does, says McIsaac.

But the problem goes beyond California and the US. In the UK, more than 70,000 academic staff at 150 universities are poised to strike for three days later this month over similar concerns about inadequate pay and working conditions. Getting a contract like the one UAW is pushing for ‘would definitely send a message to other universities that it’s important to settle these things before it gets to the point of your students having to all go out on strike’, McIsaac says.

‘The labour movement in academia is at a critical point where workers… are getting fed up of their working conditions and demanding better,’ Hardikar says. ‘They are saying: “If we are the ones doing the critical mission of educating the next generation and if we are doing the critical work of doing cutting-edge research, why are we still living in poverty and why do we not have good working conditions?”’