There is no hidden understanding to be teased out by 'improving' the periodic table, argues Philip Ball. But Eric Scerri begs to differ

There is no hidden understanding to be teased out by ’improving’ the periodic table, argues Philip Ball. But Eric Scerri begs to differ

In a recent book review, I questioned both the alleged aesthetic appeal of the periodic table and the value of looking for ’improved’ ways of arranging the elements (see www.allperiodictables.com). ’What is it that inspires these spirals, pretzels, pyramids and hyper-cubes?’ I wrote. ’They hint at a suspicion that there is some hidden understanding to be teased out from these baroque juxtapositions of nature’s "building blocks". No one doubts the table’s mnemonic utility, but new-fangled configurations of the elements will not improve that function more than infinitesimally. It seems perverse that we continue to regard the table as an object of beauty, rather than as just the piecemeal way things turned out at this level in the hierarchy of matter.’ This plunged me into debate with Eric Scerri of the University of California at Los Angeles, US, author of The periodic table, its story and significance  (Oxford University Press, 2007). 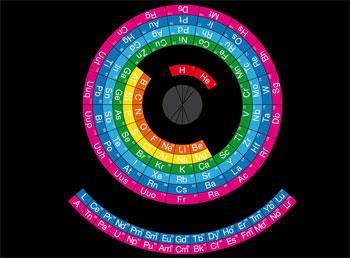 PB:  The table is not geometrical - it has order, but not a particularly simple or elegant one. The debate about where to put hydrogen, for example, seems semantic - we know what hydrogen is, wherever we choose to put it.

ES: There is nothing wrong with trying to find better representations of the periodic system, which points to a deep regularity in nature in spite of its anomalies and blemishes. Debates about the correct placement of helium (either group 2 or 18) or hydrogen (either group 1 or 17) are legitimate, because the order among the elements is an objective fact, not a matter of convention.

What matters is not shape, but where the (approximate) repetitions occur. Should helium be regarded as an alkaline earth element because of its two outer electrons, or a noble gas because of its full shell? It depends to some extent on whether one believes that electronic configuration is all-important, or whether the chemical inertness of helium is decisive. Chemists have the last say in placing helium in the noble gases.

PB:  I suspect many of the attempts at redesigning the table are trying to elevate the regularities and deny or hide the contingencies, such as the delayed d and f block filling. Your comment about helium seems to prove the point. These distinctions and categories are human decisions about where to put boundaries - they’re not irrelevant, but they don’t seem terribly fundamental. Surely what matters is how helium behaves as a chemical element.

ES: Worrying about which groups elements belong to can lead to new science. I see a parallel to the work in the 19th century with pair reversals: iodine and tellurium were in the wrong groups. It wasn’t until Moseley’s work that this was resolved. Primary classification or ordering of the elements became based on atomic number (Z)  rather than atomic weight. At present, secondary classification (placement into groups) cannot be carried out unambiguously. Electronic configuration doesn’t always settle the issue.

You assume that He is definitely a member of the noble gases. The people who defend the left-step table would disagree, and some argue that we can’t go by apparent chemical ’properties’. My own view is that He should remain in group 18, whereas H should be moved to the halogens (group 17; see Chemistry World, March 2009, p46).

PB: But are there are debates about the arrangements of the elements aside from H and He, which are arguably sui generis? what about anomalies in trends introduced by quirks of ground-state electronic configuration. Does anyone worry that the table fails to encode these? They’re really part of the messiness that I feel advocates of the table’s ’beauty’ sweep under the carpet.

ES: There are issues about placement of elements in group 3. Some older tables have Sc, Y, La, Ac, some newer ones have adopted Sc, Y, Lu, Lr, but the matter isn’t settled.

There are about 20 anomalies in electronic configuration, and no general theoretical treatment from quantum mechanics. Ad hoc explanations try to account for cases like Cr and Cu, but these fail for the second transition series. Take the ’half-filled sub-shell stability’ myth. Cr is supposed to be stable because of the 3d 5  half-filled subshell - but in the second transition series, as many as six out of 10 elements are anomalous.

I suppose this could be regarded as lacking beauty if one makes electronic configurations primary. But there’s no denying the beautiful periodicity in, say, maximum oxidation state of the elements in all three transition series, although even here there are minor anomalies.