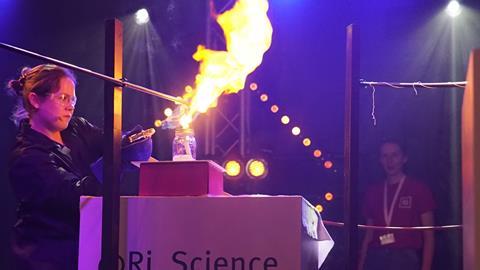 Jemma Naumann got her first taste of science communication through demonstrating experiments to first year students in her final year at Adelaide University in Australia. ‘I’ve always enjoyed doing experiments,’ she explains, ‘[and] when I found that I really enjoyed the teaching and then talking [about the experiments], it cemented my idea of wanting to go into science communication.’ Born and raised in Adelaide, she now communicates science on the other side of the world, running the Royal Institution’s L’Oreal Young Scientists Centre, in London, UK, where she presents a range of practical workshops for school-aged students.

Being the daughter of a chemistry teacher, Naumann was always exposed to chemistry and chose a year long organic chemistry research project in the final part of her undergraduate degree. ‘I was thinking about going into research and doing a PhD, but at the end of that honours year I discovered that there was a master of science communication outreach programme in Canberra at the Australian National University.’ This meant that in 2015, Jemma joined the circus! The master’s programme included a 12 week tour of Australia with the Shell Questacon Science Circus, presenting science to schools and local communities.

Naumann was already familiar with the Royal Institution (RI) before she saw there might be an opportunity to work there. In 2008 she was one of 10 Australian students awarded a scholarship to attend the RI’s Christmas lectures in London, and she even got to help out with one of presenter Chris Bishop’s demonstrations. After her master’s and while still in Australia, she saw a role advertised at the RI. Interviewing over Skype, it seemed like a long shot, but she was asked to join the L’Oreal Young Scientist Centre team, initially as a lab assistant and workshop facilitator.

Since then Naumann has been promoted to her current role, which involves co-ordinating the lab’s activities, designing experiments and developing new workshops. Working for the RI is still a thrill. The RI theatre is where many discoveries were first announced to the public in the 19th century and some of the equipment used for those demonstrations can still be seen in the RI’s museum. ‘Seeing some of Humphrey Davy’s original chemical element samples or Michael Faraday’s first electric motor, as well as his lab, it’s very inspiring,’ she says.

For the last three years she has assisted backstage with some of the demonstrations at the Christmas lectures. She has also had the opportunity to build her own spectacular demonstrations with help from RI colleagues and in 2019 won the Cheltenham Science Festival’s ‘over-ambitious demo challenge’.

Their ‘Rube Goldberg machine of fire’, was partly based on a demonstration first conducted by Davy at the RI. In his experiment he set up two curved mirrors facing each other. Gunpowder was placed in front of one mirror and a red-hot cannon ball was placed in front of the other. The heat from the cannonball reflected off the mirror was focused onto the gunpowder, causing an explosion.

‘In the re-creation we did, we use a heat lamp that gives off lots of [infrared] light instead of the cannonball, and flash cotton instead of the gunpowder,’ explains Naumann. Then, via a series of flash cotton fuses her machine ignited a tube filled with methane gas and culminated in combusting a bowl of onion rings using liquid oxygen and exploding two hydrogen balloons. Designing, testing and perfecting a demonstration with so many moving parts was probably a week’s work, but ‘very fun to do’, says Naumann.

In 2020 during the lockdown Naumann was furloughed by the RI, but took the opportunity to branch out into presenting science via social media platforms. ‘I started a YouTube channel and then an Instagram page as a way of building my skills,’ she says, plus ‘I had quite a few friends with young children who were looking for ideas for science experiments that they could do at home.’ The move to science communication online seems likely to stay an important avenue for science centres so they can expand their reach, but she is also very happy to now be back working face to face with students at the L’Oreal Young Scientists Centre.

Her advice to current graduates is to start getting experience as soon as possible. ‘Check any science festivals that are around where you live as well as science centres, look for experience in volunteering, or even just casual jobs.’