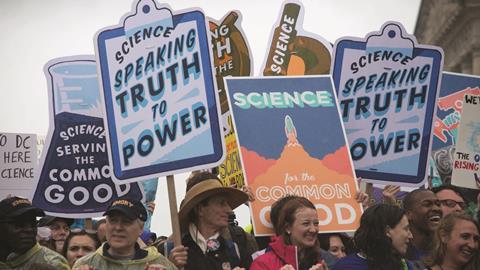 The scientists taking a stand against politics they oppose

In times of existential threat, scientists have always made their voices heard. During the 1950s nuclear weapons tests, Linus Pauling was one of many well-known scientists who chose to speak out publicly and in 1964 was awarded the Nobel prize for peace. In 1969, at the height of the Vietnam war, a group from the Massachusetts Institute of Technology, US, founded the Union of Concerned Scientists. ‘They felt that they couldn’t say some of the things they wanted to say within the university confines, so they stepped out into Campbell Square in Cambridge and started doing “teach-ins”’, explains Andrew Rosenberg, the current director of the Union’s Center for Science and Democracy.

But there’s no question that today many scientists are also feeling a need to take action. We are living in turbulent times - the presidency of Donald Trump in the US, Brexit in the UK and climate change everywhere and scientists are speaking up on issues that affect both their professional lives and society at large. So what is the modern face of scientific resistance?

The aftershock of Trump’s election in November 2016 was the trigger for scientists in the US to flock to several causes. At the University of Colorado Boulder, four friends set up 500 Women Scientists – a campaign to
re-affirm their commitment to support women and other marginalised or under-represented groups in science. ‘We feared the worst,’ says Kelly Ramirez, one of the founders of 500 Women Scientists and currently a post-doc at the Netherlands Institute of Ecology. ‘[We] decided “let’s do something” and we started an email stream with women we knew, other scientists. It quickly grew.’ The group’s name comes from their hope to get at least 500 to sign up to their pledge. ‘Over the weekend we got 5000 signatures, by the end of 2016 we had 10,000 and now we have over 20,000.’

Ramirez says the issue was not something she had campaigned about before. ’I didn’t look up to see how much [other] people were struggling and that there were indeed deep challenges that were really embedded in the scientific community,’ she says. ‘The Trump situation just threw a huge spotlight on all the problems.’

The initiative is far from alone; for example, a team from the University of Chicago set up the website bannedscientists.org to draw attention to the impact Trump’s immigration ban was having on visiting researchers, whose status had become uncertain. And since the US election, membership of the Union of Concerned Scientists’ active campaigning network has increased from 18,000 to 23,000. ‘We are seeing people much more willing to take action,’ says Rosenberg. In the US, this is particularly in response to the new government’s decisions on the environment and public health, and a feeling that ‘the administration has effectively decided to completely side-line science in public policy’, Rosenberg explains.

This new wave of activism isn’t restricted to the US. In April 2017, the March for Science – initially a protest against Trump – galvanised a global response, with more than 1 million people marching in over 600 cities worldwide. Around 10,000 marchers were estimated in London, UK, whose organiser, Story Sylwester, was another first-time campaigner spurred into action by the US elections. ‘I felt helpless watching the events unfold, and somewhat bemused, and had wanted to get involved,’ she explains. An American palaeopathology masters student at Durham University, Sylwester connected to the organisation through social media and eventually became key to the event.

But some scientists in the UK were already seasoned campaigners. In 2015, after the UK general election when it became clear there would be a referendum EU membership, the campaign group Scientists for EU was started on Facebook. It quickly gained thousands of supporters.

Alison Woollard, a biochemist at the University of Oxford and former Royal Institution Christmas lecturer, became involved early on. Although she had been a member of the Labour party for a long time, it was only following the EU referendum that she became more active in politics. ‘It’s quite an obvious thing for a scientist to be involved in, because science depends so much on international endeavour,’ she explains. ‘It’s not just about the funding that comes from the EU, it’s really about the EU being an important mediator of collaboration and international cooperation.’

Woollard indicates that for many scientists the referendum stirred up issues wider than Brexit – the fear that we have entered a ‘post-truth’ society. She says before the referendum it felt like ‘there was the possibility of the perfect storm ahead, which was to do with societal views and distrust of scientists in general’. The infamous comment by politician Michael Gove during the Brexit campaign that ‘Britain has had enough of experts’ may have been taken out of context, but it set off alarm bells for many. ‘I think it was probably happening before Brexit,’ argues Woollard. ‘There is climate change denial and this idea, that scientists react badly to, that opinion counts just as much as evidence.’

Today’s science activists have a common sense that science is losing its place at the heart of society. This has led to what Rosenberg calls ‘pop-up organisations’ coming from the grass-roots. This new activism seems dislocated from the existing science ‘establishment’; typically organisations such as the Royal Society of Chemistry and the Campaign for Science and Engineering (CaSE) have lobbied government for better science funding and science-based policy making, but have often avoided other types of activism in a hope that evidence speaks for itself. This has led to a strange – and at times strained – relationship.

In a written statement, CaSE deputy director Naomi Weir says that ‘where the concerns of science need to be heard in the public square today, it is great that CaSE and a growing number of other groups and individuals use their voice to champion science’. The Royal Society took an arms-length position on the March for Science: at the time, it said that, while while sharing some of its positions, ‘we believe fellows of the Royal Society should decide for themselves if they wish to join the march and support them taking part in an individual capacity.’

In the US things are changing. ‘Big science societies have traditionally been more cautious about advocating particular positions, but with this administration in particular they have moved on beyond “we only talk about funding” and they are getting more engaged in issues’. says Rosenberg.

Shaughnessy Naughton, a former research chemist and 2014 US Congressional candidate, doesn’t buy the argument science should remain apolitical. ‘My response to that is: how’s that working for us?’ When politicians are ignoring and manipulating scientific evidence, she adds, ‘we are not going to shift things by pretending [the problem] doesn’t exist’.

For individual scientists, particularly early in their careers, there is the worry that their activism might be frowned upon by their bosses and colleagues or damage their scientific reputations. This, according to those involved, often proves unfounded. ‘I don’t think there is any reason to suppose because you advocate on a particular position that somehow the papers I publish are of any less quality than someone who doesn’t,’ says Rosenberg.

‘You can keep your head in your science and I’ve done that [in the past] and I don’t think that was helpful,’ muses Ramirez. She says her department has been really supportive of her advocacy, but adds ‘if there was a place that wasn’t so supportive then I wouldn’t want to work there anyway!’

Woollard makes a distinction between types of activism. ‘Labour party stuff is always something I would keep private at work, because I think not everyone will agree with your views … But my whole department embraced Scientists for EU and were more than happy to join, have their EU supporting ribbon on their Twitter account and be in group photos. That really wasn’t a problem.’

March for Science organiser Sylwester initially experienced some scepticism, with colleagues asking what the point of her efforts were. But this turned into support as the message got out. ‘Once we started to get reporting on the movement it gave it a lot of legitimacy, people stopped asking.’

For the pop-up organisations formed in the last year, another danger is not being able to follow through with their momentum. There have been recent reports of problems at the top of the March for Science organisation, with strategic and ideological differences beginning to show. This is maybe not surprising considering the march was such a ‘broad church’, with much of the organisation run by volunteers. But, Sylwester explains, the idea lingers. ‘There was a widespread cocooning for a couple of months when people went back to their lives. But recently people have started to come back together and start planning new initiatives’. She says there is talk of another march in 2018 and a central network to plan other communication activities.

Ramirez says 500 Women Scientists is also continuing. ‘We have over 150 local “pods” giving a voice to what we see as wrong,’ she says. The group have organised a writing campaign and are particularly keen on trying to change public perceptions of scientists being white and male.

According to Naughton, activism now needs to go further, and concentrate on persuading scientists to stand for office. She is the founder and president of advocacy organisation 314 Action, formed to help elect more Stem trained candidates. ‘There are really not many people with scientific backgrounds in elected office in Congress and I think we see that reflected in misplaced priorities and dysfunction,’ she says. This lack of scientific representation is also true in UK politics.

‘The attacks on science didn’t start with the Trump administration, but it certainly has been a catalyst for getting people to step up and get involved,’ Naughton says. Close to 7000 scientists responded to her recent call for potential candidate training. ‘[This was] well beyond my initial predictions and what I hear from them over and over is “I have to do something and it needs to be more than just signing another boiler plate letter.”’

Scientists for EU is also continuing to monitor the potential impacts of Brexit negotiations on science and trying to hold politicians to account. In October 2017, it published an open letter refuting foreign secretary Boris Johnson’s comments on Brexit being positive for gene therapy development in the UK.

For scientists who have taken the plunge the experience seems to have been very positive. But for many of those called to action today, as in previous periods of crisis and existential threat, they feel compelled to act as citizens rather than just scientists. ‘When I got my PhD I didn’t check my citizenship at the door. Why wouldn’t I want to speak out on issues that affect me, my family, my community and my country?’ says Rosenberg.

‘Scientists are human, they should also contribute to their communities,’ adds Ramirez. ‘I think this is my time to contribute: I will take the baton and run with it for a bit.’