Rub of the green 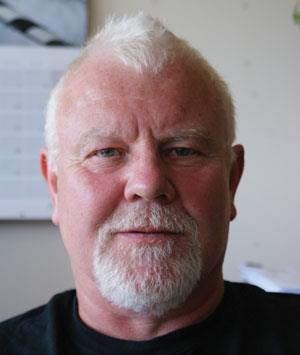 Paul Johnston considers himself a lucky man. ‘I am extremely aware of the fact that I was completely in the right place at the right time and ended up with a job that most people would think is an absolute privilege,’ he explains. The role was to set up the Greenpeace science unit and research laboratory, which he now runs from its base at the University of Exeter’s Innovation Centre. The lab provides scientific advice and analytical expertise to Greenpeace International and its offices around the world.

Johnston grew up in Southampton, where he developed an interest in marine environments. When his plans to study medicine did not work out, marine biology seemed like a natural alternative. In early 1985 he completed his PhD at London’s Queen Mary College on selenium toxicity in aquatic invertebrates, making him acutely conscious of the effects of pollution. ‘I think I had always been a bit of a closet environmentalist, but my PhD cemented my level of outrage that these sorts of things could be allowed to go on,’ says Johnston. ‘Greenpeace was a natural home for that sense of outrage.’

The move to Greenpeace happened by chance. While working part time as a postdoctoral researcher his lab was contacted by Greenpeace, who were looking for a scientist to analyse river pollution. ‘It seemed like an interesting thing to do,’ Johnson explains, ‘putting aside the naysayers who said it would be career suicide.’ He signed up for a 10-week boat trip around the UK’s industrial pollution hot-spots. ‘It was a real education and one of the things that became very clear was that Greenpeace were in need of some continuing scientific help.’

Johnston continued the work, setting up a dedicated lab at Queen Mary College in 1987, which relocated to Exeter in 1992. Now the lab has nine full-time staff and a suite of analytical equipment, including three running GC–MS instruments. The unit boasts world class facilities for analysing organobromine compounds such as brominated flame retardants, and recently discovered traces of polybrominated diphenyl ethers in foods commonly eaten in eastern China – a by-product of electronic waste recycling.

Projects are linked to Greenpeace priority areas, says Johnston. ‘We get involved with things on request, but we also help to tailor the nature of those requests by explaining from the very beginning of a project’s design what’s likely to be possible and what’s not.’ Among the projects they currently support is the ‘Detox my fashion’ campaign, which is challenging clothing brands to stop using and releasing hazardous chemicals in their manufacturing processes. Johnston and his group were tasked with arranging analyses of clothing, in which they found residues of alkylphenols, phthalates, polyfluorinated chemicals, and azo-dye precursors of carcinogenic amines.

Going back to his marine biology roots, Johnston and his team have also been involved in helping to organise a Greenpeace collaboration with Germany’s Helmholtz Centre for Ocean Research in Kiel (Geomar), studying the impact of ocean acidification in the arctic around Svalbard, Norway. This involved the Greenpeace boat MV Esperanza placing giant, 17m long, test-tube like enclosures (mesocosms) to expose plankton communities to a range of CO2 levels.

Johnston is spurred on by knowing that his team can make a difference. His role has included representing Greenpeace at meetings, such as the International Maritime Organisation’s London Convention, which in 2006 brought about a ban on marine waste dumping and ocean incineration, a process in which toxic waste was driven out into the sea and burnt, often in very primitive incineration plants. ‘That’s now banned, and I think that the scientific support we provided to Greenpeace played a very key role in that.’

Johnston still enjoys getting involved in the nuts and bolts of scientific discussions on projects, which keeps his job ‘interesting and challenging’. He says the biggest challenge is to make sure their work continues to be relevant to Greenpeace’s objectives. ‘We’ve been in business for 27 years,’ he adds. ‘We must be doing something right.’