A history of the electron: JJ and GP Thomson 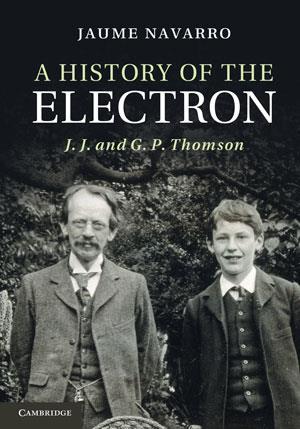 Mention father and son Nobel prizewinners and a chemist is likely to think of the Braggs (William Henry and William Lawrence), who jointly received the award in 1915, founding the field of x-ray crystal structure analysis. But at least as influential were Joseph John (JJ; 1856–1940) and George Paget (GP; 1892–1975) Thomson, who were respectively awarded Nobels in 1906 for electrical conduction in gases (effectively for discovering the electron) and in 1937 for demonstrating electron diffraction. Their achievements have been summarised as JJ showing that the electron is a particle and GP showing that it is not, or rather that the electron can also behave as a wave.

Whereas the Braggs worked together at first but followed parallel careers after the first world war, the Thomsons collaborated on positive rays both before and after the war.  The two families were also close – JJ helped promote Bragg senior’s career, and their sons were lifelong friends, spending many summer holidays together on GP’s yacht, Fortuna.

Favouring the merging of chemistry and physics, JJ considered the separation ended in his book, The electron in chemistry (1923). In his 1882 prize essay, JJ gave mathematical support to the vortex atom theory of chemical bonding of William Thomson, Lord Kelvin, who had thrice declined the Cavendish chair at the University of Cambridge, UK, which JJ accepted in 1884.

While JJ spent his career at the University of Cambridge, GP, whose education was immersed in Cambridge, took chairs at the University of Aberdeen and Imperial College London, UK, plus a spell at Cornell University in New York, US. Both proclaimed the industrial value of pure research and each eventually became Master of a Cambridge college, with JJ’s eccentricity increasing.

In the absence of full biographies of father and son, this book provides a short joint history of the electron and the Thomsons (especially JJ), and their interactions, with an emphasis on emerging science in the 1920s and early 1930s. The author – a science historian with considerable academic experience in England and Germany – has produced a scholarly and readable account of developments that underlie modern chemistry. He points out that each Thomson had apparatus that could be adapted following, respectively, the discovery of x-rays and the emergence of wave–particle dualism.

Time lines would have been helpful, but Navarro’s thoughtful narrative should appeal to both historians and chemists.

Buy A history of the electronfrom Amazon.co.uk.