Around the world in 18 elements 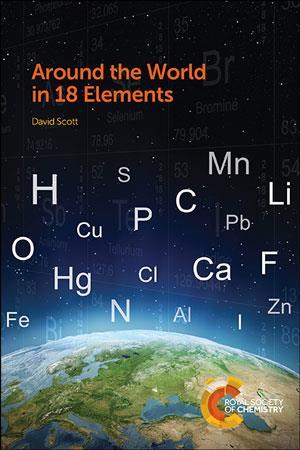 Numerous books on the periodic table have appeared in the last few years, including some singling out particular selections of elements for study (for example, A tale of seven elements and Seven elements that changed the world). What distinguishes this book from these others is that it is targeted at students and their teachers – particularly those at secondary school, although university students would surely also benefit.

The author has chosen 18 elements and examined an extensive range of their chemistries. He has clearly read widely. For example, the book is up to date with the growing evidence that links crime with levels of lead (atmospheric; not from bullets). These accounts are complemented by an excellent variety of questions – often unusual in context – that will test students’ quantitative skills. They cover various aspects of chemistry, from moles, oxidation numbers and electron configurations, through kinetics and energetics to pH, solubility and electrochemistry. The book features excellent discussions of some ‘awkward’ questions, such as giving a clear account of the reasons behind the unexpectedly large redox potential of lithium.

A problem with writing a wide-ranging book like this is that once you get started there is no limit to what you can include. All the same, I would have hoped that the section on lead would include the link between lead levels and IQ: recommending a book like Toxic truth by Lydia Denworth would provide a hat-tip to the pioneering research of Clair Patterson and Herbert Needleman. Similarly, a link between Fritz Haber’s process for making ammonia and his role in Germany’s use of poison gases during the first world war would also have been good.

However, these are very minor criticisms. I thoroughly recommend this book to teachers and students alike.

Purchase Around the world in 18 elements from Amazon.co.uk