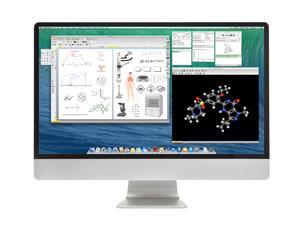 The first thing most new users will notice about ChemDoodle, having selected a bond tool to start drawing, is that a grey dot is chasing the cursor around. The dot represents an atom, which must be placed on the canvas to provide a starting point for the new bond. This necessity of building structures from a starting atom is easily turned off – high-level users will do it almost immediately – but it provides a glimpse into ChemDoodle’s origin as a drawing package aimed at students rather than professional chemists; the starting atom helps young chemists understand what their newly drawn zigzag line represents. Subsequent versions have added further features and complexity to satisfy the demands of users at any level of academia or industry. 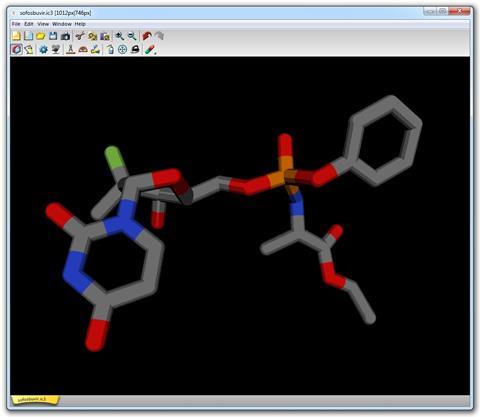 Next to catch the eye might well be what the ChemDoodle manual calls the ‘Optimize Zone’ but what users are more likely to think of as ‘that blue circle’. When clicking and holding to sprout a new bond from an existing atom, a blue circle appears. Keep the cursor inside the circle and the new bond will be placed in the (usually reasonable) recommended position; move it outside and the bond can be drawn in any direction with standard length and angle; hold down shift or alt and fine control is granted over length or angle, respectively. This idea is indicative of ChemDoodle’s approach: keeping things simple for the novice while affording the expert as much freedom and control as possible.

Nowhere is that level of control more apparent than in the gargantuan settings menus. Almost anything can be tweaked, from the obvious bond lengths and thicknesses to highly specific parameters such as the preferred placement of double bonds in fused-ring systems, the size and shape of the white-space buffer around atom labels and even the shape of the end of a bond. This extends beyond two-dimensional drawings to the included ChemDoodle 3D, where three-dimensional visualisations of molecules can be endlessly customised.

Most major chemistry file formats can be read and written and, with a couple of exceptions in particularly complex cases, formatting and document settings are retained. Structures and schemes can be embedded as editable objects in iWork, Microsoft Office and Open Office, although a workaround is required for newer versions of iWork Pages. ChemDoodle proved stable enough to handle almost everything thrown at it, manipulating maitotoxin – a molecule with 32 rings and 98 stereocenters – in three dimensions without complaint. However, there was a noticeable slowdown when editing a large file of about 60 complex molecules, which made editing the structures cumbersome. This could be improved to a degree by altering the rendering settings to favour speed over quality. 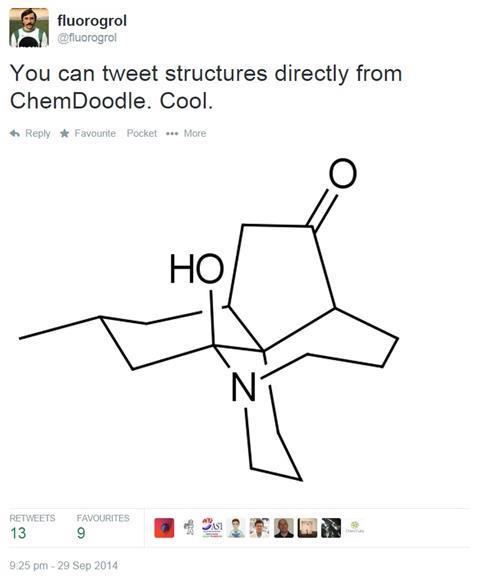 ChemDoodle's Twitter integration in action, showing the structure of fawcettimine

Perhaps most striking of all is ChemDoodle’s price. It might be tempting to assume that the bargain-basement price reflects a budget clone of costlier, better known software, but nothing could be further from the truth. Indeed, after spending long enough with ChemDoodle to acclimatise and explore the breadth of features, the higher cost of alternative chemical drawing programs becomes very difficult to justify. It’s noteworthy that the headline price is for the fully featured package – there is no standard/premium split, although there is a cheaper ‘student’ version with some restrictions.

Space permits only cursory mention of the excellent nanotube builder, the Twitter integration, the truly epic selection of handsomely drawn lab glassware, the web components for incorporation into any website, the extensive template menu with adjustable substitution points, and the (included) mobile versions for Android and iOS. For seasoned users of other drawing software there is an inevitable period of familiarisation and learning new keyboard shortcuts, but it’s worth the effort – ChemDoodle is enthusiastically recommended.