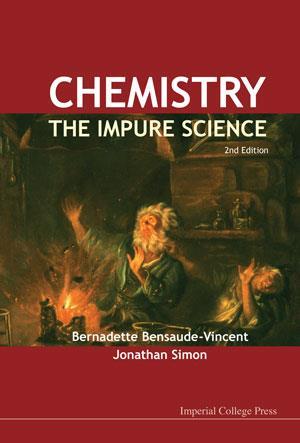 Chemistry is sometimes seen as the black sheep of the science family: the ‘impure’ science. Its focus on practical as well as theoretical work delineates it from the ‘pure’ sciences of physics and maths. Chemistry is also a loaded term: pollutants, synthetics, even ‘chemicals’ render a negative image. The irony of the ‘impure’ science’s pursuit of pure compounds, and the reliance of the modern world on such chemical products, is not lost on the authors of this book. Chemistry: the impure science explores these dichotomies and aims to elevate chemistry to a new standing. The authors propose that chemistry, unique in its practice, is also unique in its philosophical foundations. Perhaps chemistry is not as ‘impure’ as its reputation?

From the tricksters who practised alchemy in the days of old, to contemporary forays into the nanoworld, this book spans the ages of chemistry. The book’s historical accounts acknowledge the growth of the subject’s sometimes unsavoury reputation. These histories ground the authors’ philosophical explorations, which tackle the arguments of atoms and elements as well as the age old confrontation of chemistry versus physics.

I found the most enjoyable parts of the book explored chemistry’s uniqueness, especially in its apparent direct access to nature; chapter four finds the laboratory to be a place of almost mystical importance, where chemists produce a specific form of knowledge accessible only through their experiments. Throughout, the book challenges the reductionist ethic that places ‘pure’ sciences as ‘top dog’ and gives chemistry a philosophical foundation of its own.

The book is rich and interesting and the authors have gone to great lengths to include thorough accounts from chemistry’s past, separating ideas into manageable chunks through 14 self-contained chapters. While the dense detail of some of the history can make sections feel stodgy, the book is easy to dip in and out of and would be an interesting read for chemists and non-chemists alike.

Chemistry: the impure science delves into the past to assert the foundations of a modern chemistry, with a concluding chapter that might propel the subject into an ethically sound and influential future.