Early railway chemistry and its legacy 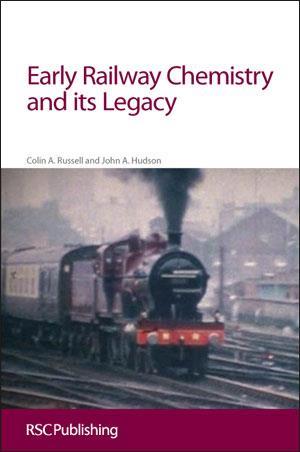 Coinciding with the development of chemistry as a scientific discipline (and chemists as a profession), the Industrial Revolution saw an outpouring of technology that created much of the infrastructure that we take for granted today, of which railways are one facet. The authors of this book postulate – and show – that there were important links between the two.

This book traces the chemistry involved in railways, starting with Stephenson’s Rocket and leading to the present. Successive chapters trace the role of the chemist; originally as consultants, but from 1864 when the London and North Western Railway was the first of numerous railway companies to appoint a railway chemist, as direct employees.

The construction and operation of a national railway network – over an amazingly short timescale – relied upon several vital chemicals. The use of steel as a strong construction material was paramount, but other significant substances include oil for lubrication, and of course water. Finding pure water to use was vitally important, as the formation of boiler scale posed considerable problems, and water treatment was expensive.

It was only during the 19th century that chemists became able to determine the composition of the substances that they and their predecessors made. As that century went on, the profession of railway chemist grew in importance, not least because of their ability to carry out accurate analyses, whether to determine the composition of steel, or the purity of water. The properties of steel in particular depend sharply upon its composition, and railway chemists devised analytical methods for this, such as determining manganese by oxidation to permanganate, followed by (the now familiar) titration with hydrogen peroxide.

It was the chemists who showed that the presence of a small amount of arsenic substantially improved the metallurgical properties of copper used for construction of locomotive fireboxes and boiler tubes, just one of many examples given of their role in materials testing in two meaty chapters. Throughout the book, the authors refer frequently to original documents, whether at Kew, in county archives or at the National Railway Museum.

The work of railway chemists has always been unspectacular, in the shadow of the engineers. Nevertheless, as the book clearly demonstrates, ‘the railway system would simply not have been possible without chemical inputs’. A fascinating book.