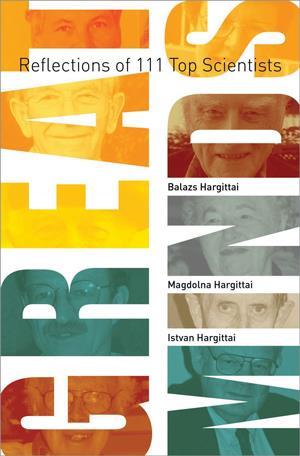 The Hungary-based Hargittai trio, distinguished in crystallographic symmetry and chemistry research, metamorphosed in recent decades into science historians who recorded conversations with many chemists and physicists eminent in the late 20th century. These records were achieved through gentle semi-biographical interviews, with probing questions under relaxing conditions. Editing yielded about 22 pages each in the six bulky volumes (typically over 800 pages) of the Candid science series, encompassing several hundred scientists.

For readers unfamiliar with these or analogous Hargittai volumes, Great minds may be regarded as ‘Hargittai-light’ since, as the subtitle hints, 111 interviews have been filtered to about three pages each. All extracts contain responses that enable one to gain a glimpse of the interviewee, less as a scientific specialist but more as an intelligent observer. As 2004 physics Nobelist David Gross says, one has to know a lot to ask intelligent questions. Of the selection, 68 received Nobel prizes and several others might well have done.

As to what happens after the Nobel, medical researcher Harold Varmus became director of the National Cancer Institute while chemist Fred Sanger retired to gardening. 1967 chemistry Nobel laureate George Porter admitted that he was thinking of retiring at age 78. Carl Djerassi, master of physical techniques in organic chemistry and developer of the oral contraceptive (but no Nobel prize) is now a novelist and playwright with a chair in chemistry, who spends London summers writing. Physicist Freeman Dyson would like to be remembered more as a writer than as a scientist.

This perceptive and enjoyable compendium, though intelligible to non-scientific readers, will appeal especially to professional scientists aware of the characters’ achievements. Absorbing in itself, it should induce readers to fuller biographies. Great minds is simply organised with dates and references and contains informal photographs of the contributors.