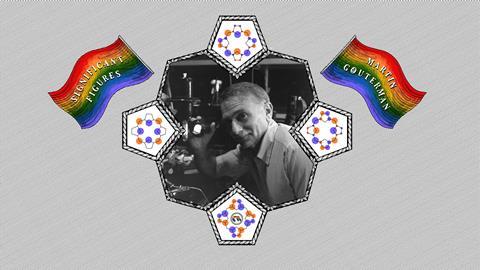 Martin Gouterman, who passed away earlier this year, was perhaps best known for his ‘four-orbital model’, although he contributed broadly to porphyrin science, from fundamental theory and spectroscopy to exciting technological applications. To those who knew him (including myself), he was an exceptional human being – a superb teacher, a gentle but highly effective mentor, and a funny and loyal friend. He was also openly gay in an era when few gay scientists were open about their sexuality.

Born in the US city of Philadelphia in 1931, Gouterman went to the University of Chicago, where he stayed on to complete a PhD in physics under John Platt in 1958. The same year he joined Harvard as a postdoc with the young British quantum chemist William Moffitt. Within months, Moffitt, only 33, died of a heart attack during a squash match, prompting Harvard to promote Gouterman to assistant professor. Gouterman began his independent career by launching quantum chemical studies of porphyrins and their optical spectra.

There were no ‘canned’ computer programs in those days, spitting out results that could be quickly packaged into finished papers. Instead, working mostly with the Hückel model, he interpreted porphyrin spectra with symmetry arguments, simple physical models such as the particle in a box, and concepts such as configuration interaction. Among other things, he explained the 10–100-fold intensity difference between the Soret and Q bands of simple porphyrins. In three or four years, the famous four-orbital model was in place. According to the model, simple metalloporphyrins are characterized by two near-degenerate HOMOs and two exactly degenerate LUMOs, and both the Soret and Q bands result from transitions involving these four molecular orbitals, taking configuration interaction into account. The model, which explained why blood (haem) is red and grass (chlorophyll) is green, remains influential to this day.

Gouterman’s students from those days recall his gentle mentoring style. Roald Hoffmann, one of his first graduate students at Harvard, remembers setting up an overnight sealed-tube reaction (the Rothemund reaction) for the synthesis of tetraphenylporphyrin. The reaction turned into a bomb and went off, scaring an undergraduate who was studying in the lab. No one was injured but the pristine laboratory in the brand new Conant building was splattered with black gunk and the odd purple crystal of the intended product. Gouterman was very kind the following day, but advised Hoffmann not to do any more experiments, unwittingly clearing the way for a brilliant career in theoretical chemistry, which culminated in Hoffmann sharing the 1981 Nobel prize in chemistry with Kenichi Fukui.

Paul Seybold, a young biophysicist who joined the Gouterman group at Harvard for his PhD, describes Gouterman as ‘a wonderful thesis advisor who let me follow my own muse while always being available with helpful advice’. As part of his coursework, Seybold came up with the somewhat radical idea of measuring fluorescence quantum yields using the heat generated in a fluorescing solution as opposed to the hard-to-standardise light coming out. Gouterman suggested that Seybold attempt to do that as his thesis project, which he did as the first experimentalist in the group. Fortunately, the idea worked out and led to a pathbreaking paper that has been cited more than 700 times.

Starting in the mid-1960s and continuing for the next 15–20 years, Gouterman and his coworkers systematically mapped out the absorption and luminescence properties of the major classes of metalloporphyrins, successfully explaining key observations with extended Hückel calculations. In 1966, he moved to the University of Washington in Seattle. Here he continued his systematic studies of porphyrin spectra and completed a grand electronic taxonomy, whereby porphyrin UV–vis spectra could be described as normal, hypso (blue-shifted), and hyper (red-shifted and with extra bands). Gouterman identified the extra bands of hyper porphyrins as resulting from ligand-to-metal charge transfer (LMCT) transitions, an insight that greatly influenced the then-rapidly evolving field of haem proteins. In a seminal paper with his student Louise Karle Hanson as the lead author, he correctly interpreted the split Soret band of cytochrome P450–carbon monoxide complexes as resulting from an interaction between regular Soret excitations and charge transfer excitations out of the thiolate ligand.

By all accounts, his move to Seattle was a happy one. At Harvard, he was not entirely open about his sexuality, and was married for a period to the late fluorescence spectroscopist DeLyle Eastwood. The couple coauthored several papers, continuing to do so even after Gouterman’s move. In Seattle, he was ‘out’ both at work and in private life. He settled down and bought a condo in Capitol Hill, Seattle’s historic gay neighborhood and home to a vibrant counter-culture community. He dived into the local jazz scene, becoming life-long friends with local jazz greats Melody Jones and Ruby Bishop.

The issue of ‘privilege’ has come into focus in recent discussions of LGBTQ+ affairs. As a ‘privileged’ cis white male, Gouterman never forgot his less fortunate counterparts, campaigning against the Vietnam War and working to promote peace in the Middle East. In an obituary earlier this year, Seattle’s LGBTQ-focused Unite Seattle magazine wrote: ‘Martin began to come out as gay in the 1960s, a time when it was not safe, personally or professionally, to do so. As recounted in the book Gay Seattle: Stories of Exile and Belonging, he helped found the Dorian Society, an organization to promote understanding and tolerance of gay people. He came up with the name, which is a coded, slyly humorous reference to ancient Hellenic warriors who considered homosexuality a virtue.’

Gouterman’s Seattle years were marked by a gradual transition from fundamental physical chemistry to analytical and applied chemistry. His departmental colleagues James Callis and Gamal Khalil were key partners in the new endeavour, centered around phosphorescent palladium and platinum porphyrins. The quenching of their phosphorescence by oxygen led to their application as pressure-sensitive paints on aeroplane wings and in wind tunnel studies, a highly successful line of work funded by Boeing and subsequently by Nasa. His PhD student Janet Kavandi recalls confiding to him her desire to work for Nasa and one day to fly in space, a confession that Gouterman, unlike most others, took very seriously. She was thrilled to do her PhD in a project funded by Nasa. And in time, she went on to fly on three Space Shuttle missions.

Gouterman donated sperm to a local lesbian couple, helping them have a son, Mikaelin Bluespruce, in 1983. Mikaelin grew up with his two moms, but at age six, through the intermediacy of Seattle’s close-knit gay community, he met Gouterman. Bluespruce recalls being excited – ‘Which six-year-old boy wouldn’t be excited to meet his dad?’ – and he wasn’t disappointed. They went on hikes together, dined around in Capitol Hill and listened to jazz. Bluespruce recalls doing homework at Melody Jones’s, while listening to her singing, and not too surprisingly, he went on to study music at New York University, becoming a well-known sound engineer, winning a Grammy in 2017.

I was fortunate to know Gouterman reasonably well in his later years. He contributed the first article in a special issue of the Journal of Porphyrins and Phthalocyanines that I edited, marking 50 years of theoretical research on porphyrins. The article, a theoretical study of spectral redshifts in protonated tetraphenylporphyrins, was an important one, recognizing their spectra as a new type of hyper spectra. In his typical other-centered fashion, Gouterman enthused about his two coauthors, Henry Linschitz (1919–2014), a Manhattan Project pioneer who inspired Gouterman to combine experimental and theoretical work, and Mirna Vitasovic, a gifted undergraduate in her teens, and of the age range they spanned.

Two memorable symposia were held in Gouterman’s honour, one on the occasion of his retirement in 2000 at the University of Washington and another in 2006 at the 4th International Conference on Porphyrins and Phthalocyanines in Rome. At the latter event, Gouterman’s talk went well but some of his friends and his son were nervous, since he was already in the early stages of Alzheimer’s disease. A few years ago, as the disease worsened, he was forced to move to an assisted living community in Seattle. Although he did not take kindly to being uprooted from his beloved Capitol Hill neighborhood, his former students visited him regularly, organising parties and taking him out to local musical events. In 2018, despite his declining condition, he was delighted to meet his new granddaughter.

According to his obituary in the Seattle Times, ‘He was beloved for his rare combination of scientific creativity, integrity, personal warmth, and modesty.’ I can add little to that simple and powerful conclusion, except that I am thrilled that through this article Martin’s story will now reach – and inspire – a global audience, including LGBTQ+ scientists, especially in parts of the world where they still live in secrecy and fear.