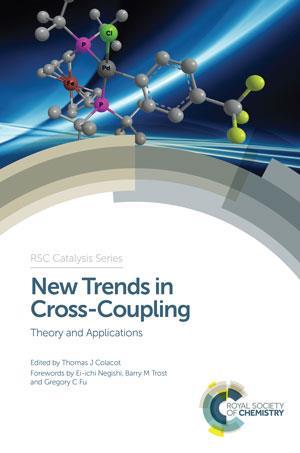 At first glance, one may question if there is need for another book on cross-coupling reactions, an area that has already been reviewed a number of times in the last decade. The answer, in short, is yes. Colacot has brought together a large number of experts in the field and compiled a series of interesting and informative chapters on a variety of cross-coupling areas, with a strong emphasis on the latest developments and a move away from the most conventional topics. This book does not replace older texts, but rather acts as an update on recent developments.

New trends in cross-coupling starts with a historic timeline for the development of cross-coupling reactions, which is followed by a chapter dealing with the different classes of ligands and their unique characteristics. Chapter three goes on to deal with the various palladium pre-catalysts available, providing invaluable inside information on their usage – these include details such as photos of common catalysts at their optimum purity and also after some decomposition has occurred. Taken together, these three chapters, which are written in an accessible and clear style, are a must read for those looking for a thorough introduction to the area and some of its trade secrets. It must be noted that, although it is not obvious from the title, this book is mainly dedicated to palladium catalysis, with only a few exceptions made for other transitions metals in some chapters.

Subsequent chapters provide state-of-the-art reviews on a variety of areas. I found the chapter on the use of N-heterocyclic carbenes and C–heteroatom formation reactions particularly interesting. Furthermore, the chapters on flow chemistry, green chemistry and large-scale applications of cross-couplings in the pharmaceutical industry are very welcome additions.

Unfortunately, there is no chapter on decarboxylative cross-coupling reactions, which have developed significantly over the last decade, but despite this I believe this book is a welcome addition to an academic’s or industrialist’s bookshelf.

Purchase New trends in cross-coupling: theory and applications from Amazon.co.uk