Note-by-note cooking: the future of food 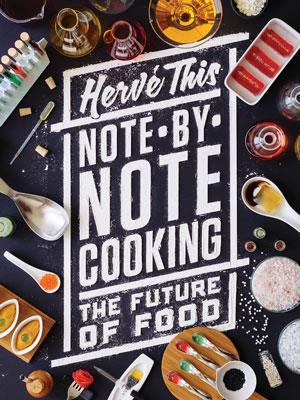 In this book, Hervé This presents his concept of ‘note-by-note’ cooking – making foods out of basic constituent chemicals, combining them to remake known foods or using them in a search for new tastes or dishes.

Cooking is in some ways similar to chemistry, but at the same time very different. This dispells the idea that he is deliberately trying to do chemistry as all cooking inevitably involves reactions – a piece of beef turns brown in the oven ‘because compounds in meat that are heated to more than 100°C react and are transformed’.

He first introduced note-by-note cuisine in 1994, then focusing on the difference between cooking and chemistry due to the negative, potentially toxic, implications when the latter is associated with the former. Instead, he simply likened the procedures and processes of a chef to that of a chemist, arguing that they do in fact complement one another, with mirroring techniques in both the kitchen and laboratory. His introduction is well suited for non-practising chemists or non-scientists with an interest in cooking, covering the topic as a whole before going into the nitty-gritty details of shape, consistency, taste, colour and odour.

The level of science in these chapters is cleverly disguised as This explains every step, making the book appeal to both chemists and chefs. In the chapter on odours, he takes the reader through various compounds that one would come across when studying chemistry, such as hydrocarbons, alcohols and aldehydes, explaining their properties and where they are found. Esters are commonly used to enhance fruit odours, reminding me of a school practical synthesis that filled the room with the delicious smell of pear drops.

The middle of the book contains a cooking gallery that presents common-looking meals made from just a few compounds as well as some truly innovative cooking techniques and recipes that you would not believe are edible. Take, for example, cordon bleu, typically a dish of meat wrapped around cheese – here it is a dessert made of five layers, tasting like strawberry and looking like a blue sponge, taking the dish back to its original meaning, blue ribbon. This dish is incredibly apt owing to the fact that the chefs at the Parisian hospitality education institution Le Cordon Bleu prepare a note-by-note dinner every year. The gallery is also a wonderful way of vividly capturing This’ belief that ‘cooking is both a technical and an artistic activity’.

Overall, the book is an interesting read and appropriate for people with an interest in either chemistry or cooking. I enjoyed seeing chemistry applied in day-to-day life and the book’s many examples. While difficult to do in my own kitchen, the appendix of note-by-note recipes is an inspiring insight into This’ methods, and his writing is both a reminder of undergraduate labs as well as of standard kitchen recipes.

Purchase Note-by-note cooking: the future of food from Amazon.co.uk