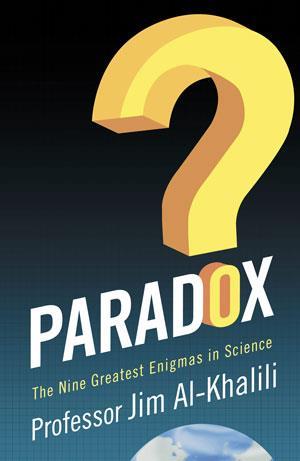 A paradox, in the strict logical sense, is a self-contradicting statement that cannot be resolved, such as: ‘this statement is false.’ Al-Khalili admits at the outset of the book that the enigmas he covers here aren’t real paradoxes, they only have appeared illogical or counterintuitive to people before they sat down and thought a bit harder.

He starts out with the well-publicised Monty Hall or game show paradox to get readers into the mood for thinking and mistrusting their intuitive responses. (Two doors hide a goat, one a car – would you switch your choice after the show host reveals one of the goats?) He then covers nine problems from physics and adjacent areas (though probably not the ‘greatest enigmas in science’ as the subtitle claims), including Schrödinger’s cat (dead and alive at the same time?), Maxwell’s demon (violating the second law of thermodynamics?), and Fermi’s paradox (where are all the extraterrestrials?), together with Zeno’s race between Achilles and the tortoise, and three problems arising from Einstein’s theories of special and general relativity.

Each of these questions has already received ample coverage in the popular science literature individually, but bundling them under the paradox banner, Al-Khalili manages to make them look fresh and communicate the scientific answers with verve. Inevitably, he has to cut corners with the explanations. I also spotted one or two slips with the history of science and some academic readers may find his chatty style goes over the top at times.

On the whole, however, this is truly a book about real science that real non-scientists and youngsters can read and understand. If they learn that scientific analysis can resolve paradoxes as tricky as these, that is already a success for science communication.