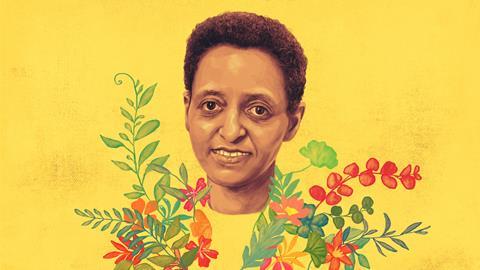 In situ with Sossina Haile

The fuel cell pioneer discusses her childhood in Ethiopia and the US, life as a scientist and being the ‘only one in the room’

Sossina Haile, a materials science and engineering professor at Northwestern University in Illinois, US, developed the first solid acid fuel cells in the 1990s, with record performance for clean and efficient electricity generation.

I was born in Ethiopia. When I was very young – from age two to four – we lived in the US. This was because my father was an academic. After we went back to Ethiopia, I attended a British school. That basically meant that I spoke English as my first language, and I even had a British accent at the time.

There was a communist revolution in 1974 and we were lucky enough to be able to flee the country. I was almost 10 when my sisters and I got out – our parents had left about seven months earlier because soldiers came to our house to try and arrest my father. They shot my dad that night. Miraculously, he and my mom were able to get to a hospital in England not long after. My sisters and I were staying with our two aunts, waiting until we could get out too.

When we went back to the US, we moved to Minnesota. What was surprising was how hot it was. Addis Ababa, where my family is from, is a bit like San Francisco in terms of climate and weather – mild all year long, with summers that are not very hot. We came to Minnesota in July to discover humidity, heat, mosquitoes – all those things that people in the US associate with Africa. But then came the winter, which gave us a shock.

I definitely considered different career paths. As I kid, I knew that I liked math and science, and that was fun. But I also liked art and writing, as well as architecture and photography. I was kind of a student activist too, so was contemplating something in the government. It was a hard decision, but mostly I really enjoyed science and was good at it, so that’s what I chose.

There was no particular role model who inspired me growing up. If we define a role model as someone you wish to emulate, someone who looks like you and has a similar path, then I would not say I had a person like that. I’ve had several wonderful mentors who were willing to give me guidance and advice, and many of them were white men.

I was never a person who resonated with role models. My father used to say to me ‘You’re just totally internally driven’. That may be why I don’t understand at an emotional level what it means to have a role model. But I do understand its importance on an intellectual level. I am happy to play that role if it matters to people and it’s going to change the landscape.

Of course, there are people whom I find hugely impressive, like Nelson Mandela, who was amazing in not being bitter, or at least not expressing it, when he came out of jail. In the sciences, I’d say someone like Linus Pauling, who won the Nobel peace prize and the Nobel prize in chemistry, combining great science with great ethics. There are also people like [Caltech chemical engineer and Nobel laureate] Francis Arnold, who is incredibly inspirational. But these folks are also intimidating because they have been so successful and done things I feel I could never do. It’s impossible to think about going down their same path.

I don’t think that I’m outside of the norm

Statistically speaking, I am certain I have suffered from discrimination through my career. I’ve seen plenty of studies showing that men are awarded more research grants than women, that men are promoted more quickly than women and that men have higher salaries than women. I don’t think that I’m outside of the norm. And if we don’t believe that women are less capable, on average, than men, then by definition, I have been discriminated against.

There’s this great photograph – I’m on some advisory board of about 15 people, of which there are 14 elderly white men with their black suits and grey hair. And I happen to have worn this incredibly colourful jacket with all these flowers. And that’s my life as a scientist.

It’s certainly the case that I’m often the ‘only one in the room’. I frequently experience something and question whether it is because I’m a woman, or I’m black, or I look young, or I’m petite, or the person treats everyone this way. But I can’t identify what it is.

There is no standout moment, just a lot of pinpricks, nonstop pinpricks. Like, ‘Can you can you get me the coffee please?’ to which I reply, ‘No, I’m not the staff here.’ That has happened countless times.

If I were starting over as a scientist, as opposed to an engineer, and were simply looking at science for science’s sake, I would probably pick the origin of consciousness as my focus. If you believe in physics and the laws of physics, then there should be no free will. Everything was set at the Big Bang. All the matter and energy in the universe came to be, and everything that happens was preordained. It’s a bit spooky.