The lost elements: the periodic table’s shadow side 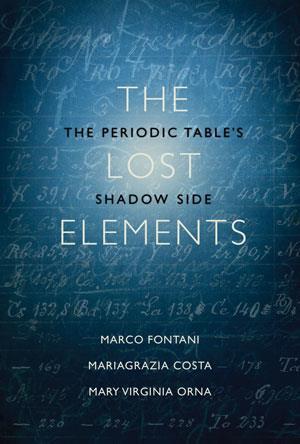 Recently, a number of new books on the periodic table have appeared. This one, however, is different: it deals with spurious elements – those that have been claimed over the last 300 years but that do not exist or contain species already known. Vladimir Karpenko’s classic paper on the topic (Ambix, 1980, 27, 77, DOI: 10.1179/amb.1980.27.2.77) lists 180 examples; this book has some 480 candidates, sometimes making valiant attempts to identify what they might have been.

The material is chronologically arranged. It starts rather uneasily with a chapter on ‘elements’ announced before 1789 – however, the concept of elements was only defined that year. The next and more successful section covers the years until 1869, the date of Mendeleev’s first periodic table. Some 36 genuine elements were identified, but also at least 50 spurious ones. In 1869–1914 another 23 genuine new elements were discovered, as well as 140 false ones, mostly inspired by Mendeleev’s tables. When Henry Moseley, Niels Bohr and Frederick Soddy laid a theoretical basis for the periodic table in the early 20th century, vacancies still existed, such as the elements 43 (technetium), 75 (rhenium) and 85 (astatine). Hafnium, discovered in 1925, begat more spurious ancestors than any other, including the so-called elements asium, celtium, euxenium, jargonium, and oceanium. The book’s final sections cover the years post 1939, with trans-uranides, modern transmutations and bizarre elements, such as anodium, cathodium and big dipperian.

Many of these lost elements arose from the credulity, over-optimism or sheer wishful thinking of their discoverers, though probably not fraudulence. It is romantic, but incorrect, to think that carolinium, jospehinium, rogerium and virginium were the names of loved ones. Strange as some of these species may seem, those who thought they had found a new element were often as odd – sometimes amateurs but usually professional chemists. Thus, the engineer and astrophysicist Henry Rowland invented a diffraction grating, with which he claimed the element demonium in 1864, Theodor Gross, a zeppelin engineer and designer, announced bythium in 1897, and the Glaswegian metallurgist Thomas French reported canadium, announcing it in the 1911 Glasgow Herald. Even the highly professional William Crookes who had discovered a real element, thallium, claimed victorium, monium, ionium and incognitum, while Mendeleev himself predicted coronium and newtonium.

This reasonably-priced book has excellent indexes of discoverers’ names, the lost elements (preceded by a chronological list of these) and general subjects. The literature coverage is heroic, with 1500 up-to-date references, often from obscure journals. A volume of serious history to dip into, but there are riches here. If you want to read in detail about anglium, phipsonium, splittium and many others – and their sometimes exotic discoverers – this is for you.

Purchase The lost elements: the periodic table’s shadow side from Amazon.co.uk