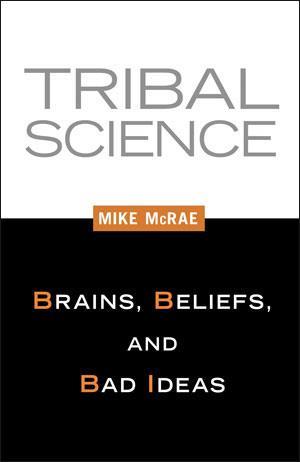 The author of this book is an Australian science writer and former school teacher, which is readily apparent from the engaging style and pace of the writing.

The book was inspired by a lecture McRae was invited to give on pseudoscience, but expands well beyond that topic. It attempts to examine the interactions between humans – as emotional, social creatures – and the cold logic of science. For example, why do genuine scientific arguments sometimes fail to persuade the general public (however that might be defined), whereas nonsense dressed up in scientific language or false logic can be quite compelling? Or how can even the most well-renowned scientists fall prey to bias and continue to believe in ideas even after they are proven (in everyone else’s eyes) to be patently false?

McRae attributes most of this behaviour to our ‘tribal’ nature. Humans evolved in interactive, social groups; our brains have developed various tools and shortcuts to aid decision-making and evaluation. But while these cognitive tools, such as language and logic, allowed science to emerge as a way of critically analysing our environment, they can also work against us: our need to formulate some kind of answer rather than accepting the unknown can lead us to latch on to conclusions not supported by evidence or logic.

Throughout the book McRae artfully illustrates his points with references to original research and historical events, from the tragic story of the French physicist René Blondlot – whose contributions to physics around the turn of the 20th century were overshadowed by his obsessive claims of having discovered a new type of radiation – to journalist Simon Singh’s legal battle with the British Chiropractic Association over the reliability of evidence behind the effectiveness of chiropractic treatment of various illnesses.

This thought-provoking volume provides an enlightened view of the way science works, along with some of the ways in which it fails and the obstacles it faces. But as McRae points out, it is up to each person to critically analyse the evidence themselves, not accept the voice of another based on their perceived authority, so I recommend you read it and make your own mind up.