In situ with Varinder Aggarwal

The renowned organic chemist on looking out for others, an epic walk and a proud day at the Royal Society 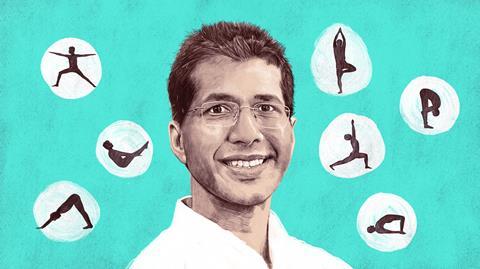 Varinder Aggarwal is Alfred Capper Pass Professor of Chemistry at the University of Bristol. His research focuses on asymmetric synthesis, with a particular focus on boron chemistry. Elected Fellow of the Royal Society in 2012, he was awarded the Davy Medal in 2019. He was speaking to Emma Pewsey

I wish I had a plan. I think life can be much easier if you know where you’re going. If I knew I was going to be an academic, I might have studied a bit more physical chemistry and inorganic chemistry when I was an undergraduate, as I wish I was better in those areas. But then I may not have enjoyed my undergraduate days as much.

Physics was my favourite subject at school. There was one particular occasion I was doing a physics question on the Doppler effect to determine the speed at which stars were moving away from us. To an impressionable 18-year-old, this just blew my mind, as I had not known that the universe was expanding, and it raised the obvious philosophical question of what it was expanding into. Some big questions there that I wanted to explore further.

I went to university to do physics. I was fortunate to go to Cambridge, where they had a broad-based natural science course. I was taught by some of the best teachers in chemistry – Ian Fleming and Dudley Williams taught organic in the first year. I quickly found that chemistry made much more sense than abstract physics! I hoisted the sails, and threw myself in to the organic landscape and have thoroughly enjoyed it ever since. It also made me realise how important good teaching is and how it can influence the careers of students, and so this is an area I put effort in too.

I’ve had a very enjoyable career, no roadblocks in the way. But life is full of challenges, and I’ve had my share of them as well. And it’s taught me quite a lot – about looking out for others, recognising that everyone has their own personal challenges and supporting them as best I can.

I don’t really like the way academia has moved compared to when I was getting a job. When I applied for an academic position, if they liked me as a candidate, I would get that position. Nowadays, universities like you to bring a fellowship to them, because obviously it saves them money. That delays when junior academics can start their career and makes it harder too.

Universities also used to have more studentships, and there was more industrial funding when I started my career. Over the years there has been a gradual reduction in the funding available from industry. Apart from AstraZeneca, other major pharmaceutical companies, who are making billions of pounds in profit, are putting less and less back into producing the very people that they want to hire. I would like to see them step up and support the chemistry community more, particularly the junior academics.

I like students and postdocs to stamp their own personality and authority on their projects. I give them space to think about the problems that they’re facing, so they can come up with their own solutions. They quickly learn not to come to me and say, ‘it’s not worked, what should we do next?’ What I like them to say is (and what they do): ‘it’s not worked, but I’ve got these ideas that I’d like to discuss with you’. It’s a really enjoyable way of working, for them and for me.

I’ve not tended to socialise with the group because I’ve had a family and had lots of other things to deal with. We used to have publication parties to celebrate individual successes but obviously we’ve not been able to do that since the pandemic. Maybe when the pandemic’s over we’ll have one mega publication party to celebrate all of our recent papers.

We also used to have an annual party at home, where everyone would bring a dish. They were absolutely fantastic – the most successful, happy, fun parties I’ve had, because when everyone brings a dish, and you’ve got a dozen different nationalities, the culinary experience is absolutely amazing. I lubricate the evening with copious quantities of beer and the wine!

A few years ago I walked the Coast to Coast across England, it’s just under 200 miles. I did it with a group of very dear old friends from my undergraduate days, and we did it in about 12 days. It was fabulous. It was one of the most pleasurable 12 days I’ve had. It was quite tough as well since invariably on a long walk you have all sorts of issues with your boots, feet, and blisters. I think I was the only one who managed to complete it without needing to take a day off.

I wanted to do something different during the pandemic that would help me now and longer term, and I decided I would take up yoga. Since the first lockdown last March I have been doing it every lunchtime, five days per week, on Zoom with a lovely teacher and I am thoroughly enjoying it. I have improved quite a bit and you should see my downward dog now!