All clear for tiny capsules of goodness 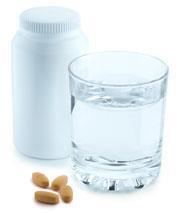 Israeli scientists have created nanocapsules based on natural food materials and loaded them with hydrophobic vitamins and other nutraceuticals (health-promoting micronutrients). The nanocapsules can be added to drinks as a health benefit without making them cloudy and they protect the sensitive nutraceuticals from degradation, which have been problems in the past.

Yoav Livney and his team from the Technion, Israel Institute of Technology, in Haifa, used the Maillard reaction to create protein-saccharide conjugate nanocapsules. This natural reaction, which causes the typical browning of food during baking and cooking, has been used to make similar conjugates to encapsulate hydrophobic nutrients, but the resulting capsules were large and turned liquids cloudy.

To overcome this problem, Livney’s team conjugated oligosaccharides derived from starch to the milk protein casein. The conjugate molecules underwent spontaneous self-assembly into a core-shell nano-structure with a bulky hydrophilic layer, leading to a large degree of curvature and so to nano-sized capsules. The capsules were so small that the drinks they were added into remained clear.

The team trapped vitamin D (a deficiency of which can lead to rickets and other disorders) and epigallocatechin gallate (found in green tea and linked to the prevention of many diseases, including cancer) inside the capsules and monitored their release during digestion. They found that the nanocapsules kept the nutrients trapped during gastric digestion. Livney predicts that enzymes excreted in the small intestine will easily break down the saccharide-protein core-shell structure, making the micronutrient cargo bioavailable for absorption.

It’s the building blocks of this system that are essential for its future use, says Cristina Sabliov, an expert in nanoencapsulation of bioactive components from Louisiana State University, US. ’This type of research, focused on food-grade components for delivery of bioactives with important health benefits, is critical for the development of safe, taste pleasing, stable and nutritious foods,’ she adds.

In the future, Livney plans to ’evaluate the entire release profile of the nutraceutical during simulated digestion, and later, to test its bioavailability in vivo, preferably in a clinical trial.’ He adds that ’encapsulating other bioactives by this method may also be studied’.