A microorganism that uses the toxic element arsenic instead of essential nutrient phosphorus to sustain growth and life has been discovered by US researchers and could help us understand how life on Earth evolved.

Arsenic is normally highly toxic to living organisms because it disrupts metabolic pathways and therefore isn’t normally considered one of the fundamental elements required for life on Earth, generally accepted to be carbon, hydrogen, nitrogen, oxygen, phosphorus and sulfur.

Organisms that chemically alter arsenic are known, but until now those that use arsenic to grow were unheard of. However, chemically arsenic behaves similarly to phosphorus, and now Felisa Wolfe-Simon from the Nasa Astrobiology Institute and colleagues who are part of a Nasa-funded research team, have discovered a bacterium that completely swaps phosphorus for arsenic and can incorporate it into its DNA. 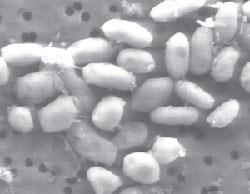 The team took samples from the toxic and briny Mono Lake in California that contained GFAJ-1 bacteria, part of the Halomonadaceae family of proteobacteria. They grew the bacteria in an artificial environment that mimicked the lake water, with the exception that the phosphorus that would usually be present was replaced by high concentrations of arsenic. Using radio-tracers the team followed the path of the arsenic in the bacteria and confirmed its presence using mass spectrometry and x-ray fluorescence spectroscopy, showing that it was being metabolised by the bacteria.

’Our data suggests that arsenic is associated with the [bacteria’s] DNA, the arsenic is present as arsenate, and that it’s in a structurally consistent environment to what we would expect phosphorus to be in, in DNA,’ Wolfe-Simon tells Chemistry World. ’This is a new way to test hypotheses about life and is an example of how critical curiosity driven research can be,’ she adds.

’This discovery has enormous impact in terms of studies on the adaptability of a living cell to extreme conditions,’ says Milva Pepi, a microbiologist from the University of Siena, in Italy. ’The bacterium adapts well in the presence of arsenic, suggesting the still unknown potential of bacteria to adapt and maybe colonise environments such as the surface of new planets, offering insights for exobiology studies of life in other systems,’ he adds.

Wolfe-Simon believes that her team’s discovery has great significance. As well as offering insights into how life evolved, she explains that it be an important development in helping to deal with arsenic-contaminated drinking water, a particular problem in developing countries such as Bangladesh.

In the future, Wolfe-Simon hopes to be able to sequence the genome of GFAJ-1 and also plans to investigate whether any of the other vital elements could also be replaced.

The team’s research caused a stir even before it was published in Science  with a press release from Nasa indicating that the findings would have an impact on the search for extraterrestrial life. This resulted in huge speculation in the media regarding the details of the work with stories appearing in the UK national press before the press embargo had even been lifted. 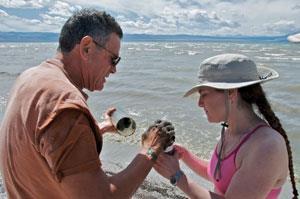 Speculation and controversy were not curbed following publication of the research, as many were sceptical of the quality of the data. Concerns arose from the team’s interpretation that the arsenic was incorporated into the microbes’ DNA and whether they had completely stopped consuming phosphorus.

In response to the media frenzy, Wolfe-Simon reiterates that the data and results presented were thoroughly reviewed and accepted for publication in  Science and says that the team welcomes the lively debate on the subject as ’scholarly discourse moves science forward’.

But she also explains that she has been concerned that some conclusions drawn about the work were based on speculation before the paper was published, not the research itself. ’We invite others to read the paper and submit any responses to  Science for review so that we can officially respond,’ she says. ’We are preparing a list of "frequently asked questions" to help promote general understanding of our work,’ she adds.