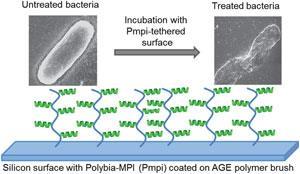 Researchers in Singapore have shown a peptide in wasp venom could be used to stop bacteria colonising materials implanted in the body.

Our increasing reliance on implantable devices such as catheters and stents, combined with the rapid evolution of antibiotic resistant strains of bacteria has created a challenge for the medical community.

The covalent immobilisation of antimicrobial peptides (AMPs) on the surface of devices to give them an antimicrobial coating has been suggested many times before. However, host cell toxicity and reduced activity following sub-optimal immobilisation strategies often hinder the success of immobilised AMPs.

In an attempt to combat these issues, Susanna Su Jan Leong from Singapore Institute of Technology and co-workers have investigated the use of Polybia-MPI, a short peptide with a broad antimicrobial spectrum and high killing efficacy from the venom of a wasp, as a potential antimicrobial coating candidate. Polybia-MPI was immobilised on a silicon wafer using allyl glycidyl ether-based polymerisation chemistry. This wafer was then tested in conditions that mimicked the physiological environment of a urinary tract. Tests showed that the outer membranes of Escherichia coli cells were damaged following contact with the treated wafer to demonstrate that the AMPs maintained their activity following surface immobilisation. Human red blood cells, however, experienced negligible cytotoxicity.

‘It could be very useful as a surface treatment,’ says Monique Van Hoek, an expert in antimicrobial peptides at George Mason University in the US. Urine is often assumed to be sterile – Van Hoek says ‘this is correct for most healthy people but there can be bacteria in the urine of patients with various infections.’

Leong expects the platform to be ‘readily applicable to other types of biodevices, such as implantable stents.’ But the team’s main aim is to immobilise AMPs on catheters to combat urinary tract infections.