American chemists have made molecular ’daisy-chains’ containing threaded rings that can be pulled taut or slackened by chemical stimuli. The polymers are a step towards making materials that stretch or contract on demand, and show great potential for applications such as actuators in nanomachinery or designing artificial muscles.

’Artificial muscle tissue is still a long way off, but we are starting to demonstrate the kind of systems where it could be possible,’ says Robert Grubbs, who led the work at the California Institute of Technology, US.

The team started with a monomer that resembles an arm with an open hand, containing a large pincer-like open ring system at one end. In the middle of the monomer is an ammonium group, where the ring can be attached - but the molecule is too constrained to bind to itself.

Using a ring-closing metathesis reaction with one of Grubbs’ ruthenium-based catalysts, the rings can snap closed around other monomers - resulting in dimers that look like two arms holding each other at the elbow. These interlocking ring systems are known as catenanes.

The dimers can then be polymerised, and in a simple reversible reaction the ammonium binding group can be removed or added. This allows the rings to slide up or down the arm of the molecule - lengthening or shortening the polymer structure. 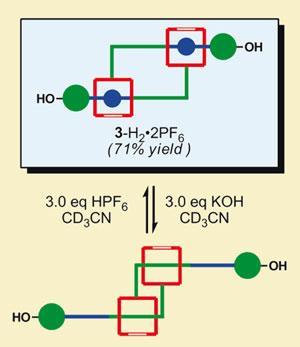 ’We’re designing molecules with particular properties on the molecular scale, in the hope those that we can translate these on the macroscopic scale,’ Grubbs told Chemistry World.  But this chemically-stimulated movement is also a useful contribution to the growing nano-toolbox, which may help design nanomachinery in the future.

Although the team has only made a few grams of the daisy-chain polymer, they are confident that enough can be made for practical studies. This is only the beginning, Grubbs adds, as the team are planning to use the same techniques to create a variety of novel shapes and systems for study.

’This is a lovely piece of work, and important as the authors are able to relate changes in the polymer dimensions to the switching of the daisy-chain dimers,’ says Fraser Stoddart, who has worked extensively on interlocking ring systems at Northwestern University, US. ’A long-awaited and very exciting result!’