How spider silk soaks up water

What causes water to collect on spider webs on dewy mornings? New research probes the structure of spider silk to find out

Spider silk may change its structure when it gets wet, enhancing its ability to capture water from the air, a new study by Chinese scientists suggests. Using insights from their observations of natural spider silk, the researchers went on to create an artificial silk that mimics its water-collecting capabilities. 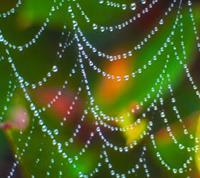 The ability of spider webs to capture and hold water, with stunning results on a dewy morning, is often treated as a beautiful but less fascinating aside to the story of their remarkable strength. But Lei Jiang at the Chinese Academy of Sciences in Beijing was keen to get to the root of this unique property. His team began by scrutinising scanning electron microscope images of silk produced by hackled orbweavers.

According to their findings, the structure of the silk changes when it comes into contact with water vapour. Loose, hydrophilic ’puffs’ of extremely fine silk, which are spaced along the dry thread, start to shrink as water droplets condense on them. Water droplets from the spaces in between are then drawn towards the resulting ’knots’. Two features, Jiang’s calculations suggest, should drive the droplets towards the knots. First, a difference in surface energy between the rough knots and the smooth spaces between them, and second, a difference in pressure acting on the opposite sides of each droplet as it climbs the slope towards a knot.

But Fritz Vollrath, who studies spider silk at Oxford University in the UK, disagrees with Jiang’s theory. He thinks spider silk has to be dry to function. ’If I am correct, then the authors are studying an artefact, which is still interesting, although it has no biological function,’ says Vollrath. ’If, on the other hand, the authors are correct and in these specific silks, wetting is used - presumably to enhance capture efficiency - then the team would have uncovered an unexpected twist in the story, which would draw a lot of attention and further research.’ 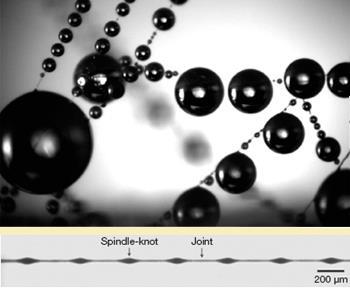 Optical microscopy image of water drops chain on a spider’s web in mist, and below, the spindle-knot/joint structure in the team’s artificial spider silk

Brent Opell, a spider expert at Virginia Tech in Virginia, US, is equally cautious about the results, although he says the experimental work is sound. ’The implication that [capture] threads have evolved to harvest moisture is not the view of most arachnologists,’ he says. ’But the study is well executed and the performance of the threads is fully described and mathematically modelled.’

Whatever the explanation, Jiang says his artificial silks - formed by coating nylon fibres with poly(methylmethacrylate)/N,N-dimethylformamide-ethanol, which dries in tiny knots similar to those in real spider silk - may have important applications. ’In areas of low rain, we can use this material to catch water droplets from the air,’ says Jiang. ’I think this could be a very useful technique in the near future.’