HP under fire for failing to phase out harmful chemicals

Environmental lobby group Greenpeace is waging war against global technology company Hewlett-Packard (HP), arguing that it isn’t doing enough to phase out harmful chemicals from the electronic products that it manufactures.

On 28 July, Greenpeace representatives painted the words ’Hazardous Products’ on the rooftop of HP’s headquarters building in Palo Alto, California, US. The group began a worldwide protest campaign against HP in June, painting similar graffiti on the company’s headquarters in Beijing, and then in July at its head office in the Netherlands.

The protests are spurred by frustration that HP has backtracked on the commitment it made in 2007 to eliminate polyvinyl chloride (PVC) plastic and brominated flame retardants (BFRs) from its products by the end of 2009. Instead, it has postponed that date by two years due to ’the lack of acceptable alternatives in necessary volumes’.

’The unconstructive antics at HP’s headquarters today did nothing to advance the goals that all who care about the environment share,’ the company said in a statement released immediately after the 28 July incident. 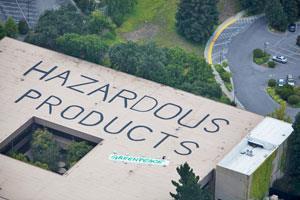 PVC plastic is known to contain dangerous chemical additives - including phthalates, lead and cadmium - which can be toxic to children, causing damage to the liver,central nervous, respiratory and reproductive systems as well as potentially contributing to developmental disorders. Research has indicated that BFRs may negatively impact the developing brain and reproductive system.

Greenpeace points to computing and electronics giant Apple as a model for green compliance, noting that the company  has already met its commitment to have all of its products free of PVC and BFRs by the end of 2008. It also says Acer, a Taiwan-based multinational electronics manufacturer, has made great strides. But others - like HP, Dell and Lenovo, which took over IBM’s consumer electronics division - have all rolled back their commitments in this area.

Feet to the fire

’We are really trying to hold these companies’ feet to the fire so that they move from green talk to green walk,’ Greenpeace’s Casey Harrell tellsChemistry World. ’HP is taking fewer steps then any of its competitors. We have put them on notice that they have these commitments and need to be delivering upon them.’

In its defence, HP says all of its new commercial PC products will be free of BFRs and PVC by autumn 2010, as will all of its new PC products released by the end of 2011. But the problem of eliminating PVC and BFRs has proven to be tricky to address. Dell, which  already delivers some BFR/PVC-free or -reduced products, acknowledges facing some significant obstacles.

’Several challenges remain to reaching BFR/PVC-free in all products, including the lack of viable replacements for BFR/PVC in some applications and the lack of a scalable supply of replacement materials to meet high volume, global production needs,’ states Dell spokesperson Kimberly Otzman.

Greenpeace is leading the call for a legislative solution. ’Just having a handful of companies taking these things out of the supply chain won’t solve the problem,’ Harrell warns. He notes that the European Union is now considering adding new chemicals and compounds to its  Restriction of Hazardous Substances (RoHS) Directive, and insists that PVC plastic and BFRs should be included.