Although chemical trade groups support the president's emphasis on manufacturing and energy, they caution against overregulation

The US chemical industry applauded President Obama’s emphasis on manufacturing and energy during the annual State of the Union speech. But the sector is also stressing the need for balanced, rational regulations that don’t stifle innovation.

During his address, Obama said that the nation’s economic recovery begins with American manufacturing. As a result, he intends to amend the tax code to prevent companies from getting tax breaks for moving jobs and profits overseas. He proposed that every multinational company should have to pay a basic minimum tax and high-tech manufacturers that make products in the US should see their tax deduction double. ’We have a huge opportunity, at this moment, to bring manufacturing back,’ the President said. ’But we have to seize it.’ 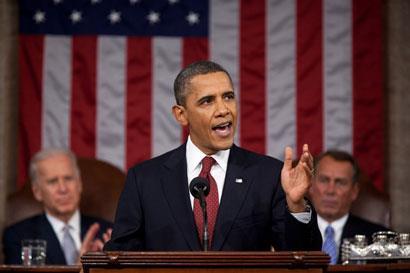 Obama also touted the benefits of developing natural gas, saying it will create jobs while powering cleaner, cheaper trucks and factories. ’We have a supply of natural gas that can last America nearly 100 years and my administration will take every possible action to safely develop this energy,’ he said, citing estimates that the industry will support more than 600,000 jobs by the end of the decade. But the Society of Chemical Manufacturers and Affiliates (SOCMA) criticised the president’s address as ’more like a campaign speech than a legislative wish list’, saying it shares his passion for renewing the US’s manufacturing capability but ’numerous concerns’ remain regarding how to achieve that goal.

Despite Obama’s directive last year for agencies to streamline or eliminate regulations to ease burdens on manufacturing, SOCMA indicated that very little progress has been made in that arena. ’Meanwhile, the chemical industry is staring down numerous regulations threatening its ability to compete,’ the association warned. It cited the Environmental Protection Agency’s proposed boiler rules that set emissions standards for boilers and incinerators, arguing that it will weaken industry’s competitiveness by forcing the disclosure of confidential business information.

SOCMA noted that Obama has long expressed support for making the research and development (R&D) tax credit - which incentivises technological advances and hiring R&D staff - permanent. But this has not happened yet, leaving many companies in limbo. The US had the best R&D tax credit in the world in the 1980s, but now it is ranked 17th behind countries like Canada and China, the group said.

Meanwhile, Obama also announced a requirement that all companies drilling for gas on public lands must disclose the chemicals they use, and the American Chemistry Council (ACC) is urging caution. ’We agree on the need to disclose chemicals in order to give regulators the information they need, but we also need to ensure confidential business information is protected,’ ACC tells Chemistry World. The group says the hydraulic fracturing requirements by responsible state agencies ’must strike the right balance between sharing information and protecting business information’.

Beyond manufacturing and energy, another key topic that Obama broached during his speech is the need for immigration reform. In 2009, international students earned 27% of all master’s degrees in science and engineering, 57% of engineering doctorates and 47% of graduate degrees in computer science. ’As soon as [these students] get their degree, we send them home to invent new products and create new jobs somewhere else,’ he said. He urged Congress to pursue legislation that would ’stop expelling responsible young people who want to staff our labs, start new businesses and defend this country’.