Prenatal exposure to common air pollutants known as polycyclic aromatic hydrocarbons (PAHs) has for the first time been strongly linked to decreased intelligence. PAHs are byproducts from burning organic material, and their primary source in cities is motor vehicle emissions.

The new research, by scientists at Columbia University in New York City, US, found that New York City children exposed in utero to high levels of PAHs had full scale and verbal IQ scores that were 4.31 and 4.67 points lower respectively than those of less exposed children.

The study  defined high PAH levels as above the median of 2.26 nanograms per cubic metre. The researchers controlled for maternal education and IQ, as well as for active smoking by the mother, second hand smoke exposure and lead exposure. 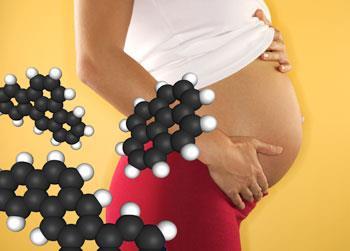 Prenatal exposure to PAHs has been found to affect intelligence scores

After tracking 249 children from before birth to five years of age and administering a standard intelligence test, the Columbia team found a drop in full-scale IQ score among those more exposed to PAHs that was similar to the effect seen with low-level lead exposure.

The researchers suggest that  DNA  damage affecting DNA structure and gene expression could be responsible for the effect.

We know that the developing foetal brain is very sensitive to diverse neurotoxicants,’ lead author Frederica Perera, an environmental health scientist who directs the Columbia Center for Children’s Environmental Health, tells Chemistry World. ’The reasons for that include the very rapid rate of cell growth and differentiation, the importance of precise epigenetic programming during this developmental period, as well as the fact that cells are proliferating rapidly so DNA is more vulnerable to genotoxic damage from [external] chemicals.’

The foetus is particularly vulnerable as its molecular and cellular defences are not yet fully developed. ’The same exposure in childhood or adulthood would not have the same effect as during the in utero period,’ Perera explains.

These findings are important because they could be a predictor of future school success. But  Perera notes that airborne PAH concentrations can be reduced through basic controls and policy interventions.

’Ambient air pollution is really a problem for policymakers,’ she tells Chemistry World. ’Means are available to control and prevent these exposures through policies that would, for example, reduce vehicle emissions, promote alternative energy sources and energy efficiency, and reduce traffic congestion in urban areas.’

The Columbia researchers continue to follow the children, and are also conducting parallel studies in Europe and in China.

Low level lead exposure has been shown to damage a child’s IQ, learning and memory. Currently, the EPA requires air quality monitoring in areas where industry emits at least one tonne of lead a year, and in urban areas with populations of 500,000 or more.

The agency will now consider whether additional monitoring is required near industrial sources of lead, and will review monitoring requirements for urban areas. The agency is not, however, reconsidering the lead standards themselves.