Regulator's doubts grow over bisphenol A

Canada's national public health agency, Health Canada, has become the first regulator in the world to label bisphenol A (BPA) as 'toxic' 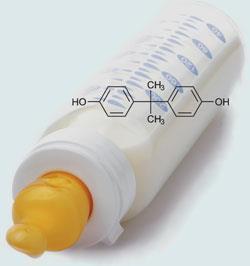 Canada’s national public health agency, Health Canada, has become the first regulator in the world to label bisphenol A (BPA) as ’toxic’. The monomer has been used for decades to make products like plastic baby bottles and food containers.

Tony Clement, Canada’s health minister, announced the decision on 18 April. The Canadian government is now proposing a ban on polycarbonate baby bottles and controls on the use of BPA in coatings inside tins of baby formula. Clement also announced a 60 day public consultation on whether import, sale and advertising of the oestrogen-like chemical should be banned. Besides food and drink containers, the chemical can also be found in many other common goods like CDs and consumer electronics.

Some major Canadian retailers have already reacted to the news, with the country’s largest national seller of sporting goods, the Forzani Group, deciding to pull all water bottles containing BPA from its shelves and replace them with BPA-free alternatives. Similar announcements came from the Canadian Tire Corporation, Wal-Mart Canada and others. Nalgene Outdoor Products has said it will stop using BPA in its bottles.

Separately, the US National Institutes of Health also released a draft report on 15 April concluding that BPA may be linked to several serious reproductive and developmental problems, like breast cancer, prostate cancer and the early onset of puberty. The report, from NIH’s National Toxicology Program (NTP), indicates that the dangers of BPA are greater than was concluded by an earlier panel that released its findings in August 2007.

The earlier NTP panel only expressed ’minimal’ concern about BPA’s links to prostate cancer and early puberty, and it also made no mention of whether the chemical could cause breast cancer. The new report elevates the level of all these concerns to ’some’, while both reviews conclude that there is cause for concern about the chemical’s neural and behavioural effects in foetuses, infants, and children at current levels of exposure.

Scott Belcher, a pharmacologist at the University of Cincinnati, says the new NTP report represents ’an attractive middle ground’, adding that the August 2007 report ’ruled out so many studies on grounds that are not completely valid. I am very pleased that they extended the conclusions of the earlier report - that was reasonable and appropriate,’ Belcher told Chemistry World.

The findings prompted an immediate call from lawmakers for the US Food and Drug Administration (FDA) to reconsider its position on BPA’s safety. ’These assessments fly in the face of the FDA’s determination that BPA is safe,’ said John Dingell, the Michigan Democrat who chairs the House of Representatives’ Energy and Commerce Committee. ’I hope the FDA is willing to reconsider their position on BPA for the safety of our infants and children.’

Dingell and Bart Stupak, who chairs that committee’s oversight and investigations subcommittee, are currently heading up an inquiry, launched in January 2008, into the FDA’s decisions about BPA. The two recently accused the FDA of cherry-picking research to support its decision on the use of BPA in baby bottles and other products for use by children.

In a letter to FDA Commissioner Andrew von Eschenbach, Dingell and Stupak note that the agency’s position on BPA’s safety is ’entirely dependent on two studies’ that are both funded by a subsidiary of the American Chemistry Council (ACC), which represents plastic resins manufacturers. Moreover, one of the two studies has not been published or peer-reviewed. ’Given that there are dozens of published, peer-reviewed studies related to BPA, your development of critical public health policy in this manner, especially as related to infants and children, seems highly questionable,’ the two write.

Then, less than a week before the release of the new NTP report, they ratcheted up tensions further, threatening to subpoena the agency if it did not provide information on its BPA verdict before 18 April. As Chemistry Worldwent to press, the FDA had not replied to the congressmen’s letter and said it would not necessarily do so before their deadline had passed.

The agency maintains that there is no reason to ban or restrict the use of BPA in food or drink containers.

Meanwhile, the ACC continues to defend the safety of BPA, saying NIH’s report affirms that the chemical has ’no serious or high level concerns for adverse effects on human reproduction and development’.

However, ACC sent a letter to the FDA on 17 April, asking it to update its review of BPA safety in food contact applications, taking into consideration the draft NTP brief and other new data. ’ACC encourages FDA to make a complete review of the scientific data from around the world in its review, including the recent work of the European Food Safety Authority (EFSA) and other regulatory bodies,’ Thomas Gibson, ACC’s senior vice president for advocacy, wrote to the FDA’s von Eschenbach.