US takes delivery of Mo-99 made without bomb-grade uranium, but urgent supply problems remain

The first batch of imported molybdenum-99 (Mo-99) produced with low enriched uranium (LEU) and approved for patient use in the US arrived earlier this month. However, there is concern that the achievement is primarily political and does not address the US supply shortage.

Mo-99 is widely used to detect illnesses, including heart disease and cancer, through nuclear medicine scans. Approximately 20 million medical procedures involving nuclear medicine are performed in the US every year. But the US imports all of its Mo-99, which is manufactured at a handful of aging nuclear reactors in Europe, Canada, Russia and now South Africa.

Unplanned shutdowns of these reactors for maintenance or safety reasons have led to shortages of medical isotopes, with scarcity of the important medical isotope reaching crisis level last year.

The delivery to Lantheus Medical Imaging near Boston, Massachusetts, US, is the result of collaboration between the US National Nuclear Security Administration (NNSA) and the South Africa Nuclear Energy Corporation (Necsa), a state-owned company. 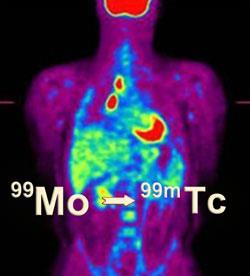 ’A fundamental part of the GTRI program is to achieve nuclear nonproliferation goals without negatively impacting the supply of Mo-99, which is used by tens of thousands of patients every day,’ Parrish Staples, director of European and African threat reduction at the NNSA, tells Chemistry World.

South Africa converted highly enriched uranium (HEU) to LEU, while maintaining its Mo-99 capacity, demonstrating, he says, that the two objectives can be accomplished simultaneously.

’This is a landmark achievement - it is something that we have been pushing for 20 years, and the commercial producers said it was impossible,’ says Alan Kuperman, a University of Texas nuclear proliferation expert. ’Now we see that the other major producers of Mo-99 also could convert from bomb-grade uranium to LEU.’

Others, however, say that such short term efforts are shifting medical isotope capacity farther from the US.

’The [NNSA] announcement is all about nonproliferation,’ says Robert Atcher, a radiochemist who manages the Department of Health and Human Services’ programs with Los Alamos National Laboratory. ’It doesn’t expand US production capabilities at all.’ In fact, Atcher says there is some indication that the molybdenum yield from the process is lower with LEU than HEU.

The most recent shortage was caused by the volcanic eruption in Iceland earlier this year, which held up shipments. Each day a shipment is delayed translates to a loss of 25 per cent of the molybdenum to radioactive decay, according to Atcher. ’Mo-99 doesn’t have much of a shelf life,’ he says.

Most observers agree that the US needs to start producing its own medical isotopes to protect against supply interruptions.

Covidien, a healthcare device and supply company based in Dublin, Ireland, with corporate functions at its Mansfield site in Massachusetts, US, began working with US engineering firm Babcock & Wilcox in January 2009 to develop technology to manufacture Mo-99. The ongoing collaboration is billed as an initial step toward establishing large-scale US supply of medical isotopes.

’We are all moving as rapidly as we can because it is clear that LEU will be the standard for the molybdenum production facilities,’ says Covidien spokesman Stephen Littlejohn.

Meanwhile, the NNSA’s goal is to ensure through its cooperative agreements that Mo-99 is produced domestically without the use of HEU by the end of 2013. New legislation - which passed the House of Representatives last year with an overwhelming 400-17 vote, but then stalled in the Senate - would phase out US exports of HEU for foreign production of medical isotopes within 7-13 years. It would also foster domestic production of Mo-99 without HEU and subsidise construction of production facilities by authorising government cost-sharing.

The bill will likely be reintroduced in the new Congress after it convenes in January. Its main opponent in the Senate - Republican Kit Bond from Missouri - is retiring and won’t be returning to Capitol Hill.