The US solar push

The US Department of Energy (DOE) is awarding loan guarantees worth nearly $2 billion (?1.32 billion) to two solar companies, in a major push to develop alternative energy technologies. Roughly $400 million will be used to develop the first facility to use a new manufacturing technology to make cadmium telluride (CdTe) solar panels, while the remainder will be used to build the largest concentrating solar power plant in the world.

The $400 million loan guarantee goes to Abound Solar Manufacturing, based in Loveland, Colorado, to develop thin-film solar panels. The company will increase production of its thin-film photovoltaic modules at an existing manufacturing plant in Longmont, Colorado, and establish a second, larger manufacturing plant in Tipton, Indiana. This is expected to create more than 1,200 high-tech jobs in both states, and also lower the cost of solar power.

’This will be the first time this new manufacturing technology for CdTe panels is deployed commercially anywhere in the world,’ explained the DOE.

Abound expects to produce millions of photovoltaic modules a year using a process in which thin films of CdTe are deposited onto glass panels. The technique, developed by Colorado State University (CSU), DOE’s National Renewable Energy Laboratory and the US National Science, offers many improvements over existing manufacturing methods and reduces overall production costs, says the DOE.

CSU’s Walajabad Sampath, who helped develop the technology, told Chemistry World the amount of semiconductor material needed to create CdTe solar panels is 100 times less than silicon panels require, and that the process has few manual steps and can be automated.

Furthermore, Sampath says the total CdTe released into the environment during the panel production process - including mining, recycling, production and installation - is relatively low compared to other sources like silicon.

The bulk of the DOE’s loan guarantee - $1.45 billion - will go towards constructing the largest concentrating solar power plant in the world. 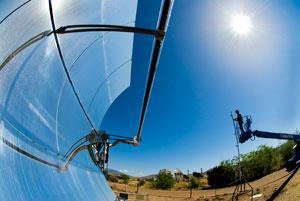 The facility will be operated by Abengoa Solar, a technology provider based in Denver, Colorado, and will add 250 megawatts of capacity to the electrical grid of its Solana, Arizona plant using parabolic trough solar collectors and a cutting-edge six-hour thermal energy storage system.

It is estimated that the project will produce enough energy to serve 70,000 households and will prevent the emission of 475,000 tonnes of carbon dioxide a year compared to a natural gas burning power plant. It will also employ approximately 1,600 workers during the construction phase of the project and create over 80 skilled permanent jobs for the plant’s operation.

DOE spokesperson Ebony Meeks told Chemistry World that although these investments in solar are significant, the department is not pursuing one technology over another. ’The government is not trying to decide the winners and losers in the renewable energy game, our goal is to dibble and dabble into as many technologies as possible and see what rises to the top,’ she says. ’It just so happens that solar seems to have rather large projects."