Researchers led by Bill Shotyk at the University of Heidelberg tested waters bottled in the same region in Canada. 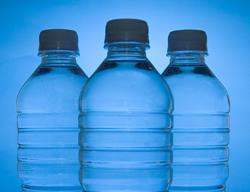 ’I’m not sure how many labs out there could really measure how much antimony is in groundwater, most people have detection limits that are far above the natural values in groundwater,’ said Shotyk.

The antimony levels in the bottled water are lower than the US environmental protection agency’s maximum contamination level, set at six parts per billion. Shotyk is more concerned that antimony continuously leaches into the water. ’My point is not that these bottled waters are contaminated with antimony,’ he said, ’the point is that antimony is constantly being released from the bottle into the water.’

David Coggan, an epidemiologist from the MRC’s environmental epidemiology unit at Southampton, UK, urges caution. Shotyk’s results need further scrutiny before any health implications could be discussed, he says, partly because little is known about antimony’s toxicity. ’It is important to think about what sort of doses people are going to get,’ said Coggan.