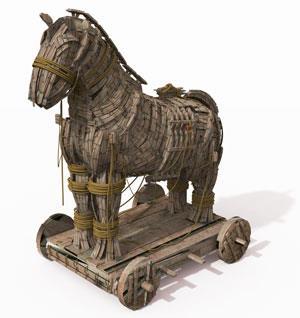 The emergence of drug resistant bacterial strains has led to an urgent need for new antibiotic agents. Scientists in the US are utilising the iron uptake pathway of Mycobacterium tuberculosis as a ‘Trojan horse’ approach to tuberculosis treatment.

Marvin Miller at the University of Notre Dame and colleagues have synthesised analogues of iron scavenging compounds that contain a maleimide functional group for future drug conjugation. Miller explains that these compounds will be actively assimilated by the M. tuberculosis pathogen by the active iron transport system, but can also carry a lethal agent into the pathogen.

One of the challenges of synthesising drug conjugates is finding a suitable functional group to attach the drug to the conjugate. The maleimide functionalised mycobactin analogue synthesised by the team simplifies the synthetic route by reducing the need for protecting groups. Thiol-maleimide chemistry can then be used to attach the drug.

Derek Tan, an expert in rational drug design at the Memorial Sloan–Kettering Cancer Center, US, is enthusiastic about the work. He believes that the advantage of the maleimide functional group is that it can react with nucleophiles, which may already be present in a potential conjugate drug, as opposed to electrophiles, which generally need to be synthetically introduced into the conjugate drug. This maleimide–mycobactin analogue ‘will enable the future synthesis of a wider array of potential Trojan horse antibiotics’, says Tan.

Miller and co-workers found that the maleimide–mycobactin analogue displayed antibiotic activity against Mycobacterium tuberculosis, but it was inactive against a broad panel of Gram-positive and Gram-negative bacteria. ‘The use of siderophores [iron chelating compounds] to deliver antibiotics exclusively into a single type of bacteria (e.g., Mtb, P. aeruginosa, E. coli), could reduce the administration of broad-spectrum antibiotics, minimising exposure and therefore the development of drug resistance’ says Miller.

In the future, the team intends to use a rational approach for selecting drugs to attach to the maleimide–mycobactin analogue, starting with drugs that inhibit essential survival processes.