President proposes to freeze US domestic spending for five years, next budget will invest in research to spur innovation

President Obama, in his 25 January State of the Union speech, sought to calm concerns that major budget deficit reduction efforts will mean steep cuts for science agencies and researchers who depend on their grants.

Although the president proposed freezing domestic spending for the next five years, he stressed the importance of continuing investment in innovation through increased government spending on research, technology and education. 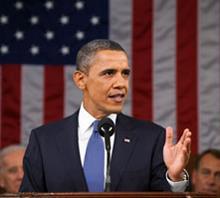 President Obama gives the State of the Union address

’This is our generation’s Sputnik moment,’ Obama asserted, suggesting the US must reach a level of research and development not seen since the height of the Space Race. ’In a few weeks, I will be sending a budget to Congress that helps us meet that goal,’ the president stated. ’We’ll invest in biomedical research, information technology, and especially clean energy technology - an investment that will strengthen our security, protect our planet, and create countless new jobs for our people.’

The US research community is celebrating such support for science in tough economic times. But some, like the American Chemical Society (ACS), say it is too early to tell how Congress will react to Obama’s plea for investment, or what effect it might have on science agencies and researchers.

’We will need to wait and see whether Republicans will embrace Obama’s call for investment in research and development, education and infrastructure before we can predict impact on the field of chemistry,’ ACS spokesperson Glenn Ruskin tells Chemistry World.

Devil in the details

The devil will be in the details, agrees Roger Pielke, Jr. from the University of Colorado at Boulder’s Center for Science and Technology Policy Research. ’Trying to cut or freeze spending at the same time as you are increasing investments in a wide range of scientific activities it is going to be tricky to say the least,’ he warns. He says the money will have to come from somewhere, and that could mean a reallocation within the federal R&D budget.

Obama emphasised the importance of maintaining US leadership in science and technology, noting that many talented researchers come from abroad to study at US universities, but are not given the opportunity to stay and contribute to the economy. ’As soon as they obtain advanced degrees, we send them back home to compete against us,’ Obama stated. ’It makes no sense.’