US debt deal is a mixed bag for researchers

The US debt ceiling agreement offers good news for science in the short-term, but could spell trouble longer-term

Now that the dust has settled on the last minute agreement reached between Congress and the White House to raise the US debt ceiling, it has become clear that the news is mixed for US science agencies and the researchers who depend on their funding. 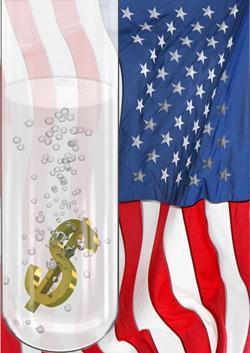 The agreement, announced on 1 August - the day before the default deadline - cuts discretionary spending by about

$1 trillion (?611 billion) over 10 years through annual spending caps, beginning in fiscal year (FY) 2012. As US research agencies are funded by discretionary spending, those caps could negatively affect their budgets.

However,  most of the reductions in the deficit agreement are not immediate - the $1 trillion in cuts is heavily weighted towards 2014 and beyond. In fact, for FY2012 - which starts on 1 October, 2011 - the debt agreement will allow for more discretionary spending than is currently being considered by the Republican-controlled House of Representatives, but less than President Obama had proposed.

The agreement’s $1 trillion discretionary spending cap is $23 billion more than the House budget resolution, but $73 billion less than the President’s request. The agreement specifies that non-security and security spending caps for FY2012 and FY2013 both increase by just $2 billion.

Although the immediate effect is relatively good news, the American Association for the Advancement of Science (AAAS) warns that federal research investments are in jeopardy. ’Federally funded US research and development in the out years - a vital driver of innovation, new enterprise and long-term economic progress - unfortunately remains at risk following the preliminary debt-limit agreement,’ stated Joanne Carney, director of AAAS’ government relations office.

She suggested that the small overall spending increase for FY2013 will further stress the agencies’ R&D investments. ’In the long term, the budget cap increases of between 1.8 per cent and 2.3 per cent each year will continue to put additional pressure on agency budgets as they struggle to keep pace with inflation and could result in a real decrease in R&D investment,’ Carney said.

The agreement also mandates the establishment of a committee that must achieve an additional $1.2 trillion in cuts, or face a sequestration process that would reduce the discretionary spending limits.

AAAS’ R&D budget director, Patrick Clemins, is not optimistic. ’If those cuts take place then we will see some severe decreases in discretionary programmes, including research,’ he warns. That scenario will become reality if the committee hasn’t agreed on a plan by November and it isn’t approved by the House and Senate by Christmas.

Judging by how the last round of negotiations went, observers says there is cause for concern that the committee will not find the needed cuts, or that if they do the proposals won’t pass through both chambers of Congress.

’Budgets for FY2012 and future years will be impacted by mandated reductions in the debt ceiling deal - but how those reductions will be spread out over the agencies is not at all clear right now,’ Glenn Ruskin, American Chemical Society (ACS) spokesperson tells Chemistry World. Nevertheless, the ACS continues to advocate on behalf of predictable and sustained funding for key R&D agencies, arguing that they represent the engines of innovation that can help strengthen the US economy.