Why us? How science rediscovered the mystery of ourselves

Why us? How science rediscovered the mystery of ourselves 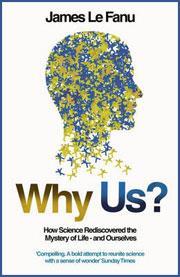 In Why us?  Le Fanu explores the power and limits of science to penetrate the deep mysteries of our existence. He says that with the completion of the Human Genome Project in 2003 and the recent advances in brain imaging we might have expected by now to know more about the secrets of life and the human mind.

In fact we are still baffled by our lack of knowledge. We have found surprising similarity between the human genome and that of other vertebrates, and in the brain there are still unanswered questions on how the electrical transmissions between synapses translate into human experience.

Mapping genes to function and monitoring individual areas of the brain, has not been able to pin down just why humans are as they are, and why they behave as they do.

It is not possible to get from a sequence of genes to the near infinite diversity of the living world, nor to translate the electrical firing of the brain into the creativity of the human mind. Science has discovered that its theories are insufficient to conjure the wonder of the human experience from the bare bones of our genes and brains.

This book explores in an interesting and compelling way the nature and purpose of human existence. There is ’more than we can know’ - thank goodness for that!