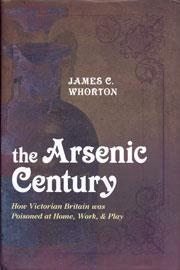 Arsenic poisoning, intentional or accidental, seemed an epidemic in Britain in the 1840s; symptoms were similar to those of gastric diseases.

By arsenic they meant arsenious acid (arsenic trioxide) or white arsenic, a rat poison available cheaply from grocers. Without taste or colour, it could mix, or be confused, with sugar or flour and hence be ingested.

The press exaggerated impressions of widespread poisoning, but life insurance and, especially, burial clubs encouraged the unscrupulous to accelerate dying. Mary Ann Cotton, hanged in 1873, insured and murdered 21 relatives, including her children and step-children.

In The arsenic century, medical historian James Whorton details Victorian Britain’s exposure to arsenic: at home, from fabrics and wallpapers (through Karl Scheele’s green pigment, copper arsenate), as employees in iron smelting, making garments or artificial flowers or from sheep dip, or drinking beer from a Manchester brewery (many victims developed a khaki skin).

The profession of chemistry was becoming established and forensic science was emerging; James Marsh devised his sensitive arsine test in 1836 and in 1841 Hugo Reinsch introduced a simpler one soon adopted by toxicologists. Previously guilt in murder cases had to be inferred from incriminating behaviour, the corpse’s state (arsenic toxicity to microbes helped organ preservation), or feeding to an animal.

Waste from an arsenic smelter in the author’s home state of Washington required removal of 1000 square miles of topsoil; one would have welcomed an epilogue summarising current risk levels and analytical methods.

While providing little assistance for an examination question on group V elements, Whorton describes many 19th century cases of murder, suicide and adulteration of food and drink with science, class and morality. Despite the book’s austere appearance and painstaking documentation (over 500, many multiple, references, but a disappointing index), there are light touches, enhanced with contemporary drawings.

For a broader social influence of arsenic, including wars and their aftermaths, readers should brave William Cullen’s deceptively titled Is arsenic an aphrodisiac? (See Chemistry World, November 2008)