Base! How low can you go? 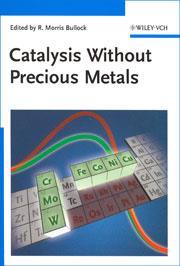 Precious metals are ubiquitous in catalysis, despite their utilisation seemingly hampered by being both expensive and scarce. Many precious metal based processes that show promise in a research laboratory may be unfeasible commercially, not only due to the high cost of the catalyst, but also the low abundance of key components. The premise of this book is to highlight recent advances in homogenous catalysis that may ultimately supplant precious metal catalysts for some applications - a reverse alchemy to replace precious metals with base metals.

The book is divided into eleven chapters, written by some of the heavyweights in this field. Each chapter reviews a different alternative to precious metal catalysts and the reactions that they show promise for, covering not only the use of less expensive metals (Cr, Mo, W, Fe, Co, Ni and Cu), but also metal free catalysis.

As with any publication written by multiple authors, some of the chapters are more readable than others. Even so, this is not a volume that the casual browser is going to easily comprehend. The book is aimed at academics and industrialists working in this area, and as such is a detailed account of the state-of-the art of these catalysts.

A shortcoming of the presentation style is that there are very few direct comparisons between precious metal and non-precious metal systems that would help to highlight how this approach could be applied to homogeneous catalysis in general in addition to the specific reactions described here. However, that is unlikely to put off the target audience for whom this book would be useful as a library resource, to dip into as and when needed, rather than an essential read for researchers in this field.