Darwin, Galton, Mendel and others

In pursuit of the gene. From Darwin to DNA

In pursuit of the gene. From Darwin to DNA 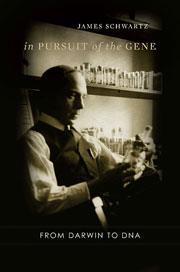 After 1858, when Darwin and Wallace finally made public their theory of evolution, a perplexing matter came to the fore. How is the biological diversity required for natural selection generated and why isn’t it ’diluted’ in successive generations?

The problem greatly distressed Darwin himself, and was addressed by outstanding biologists of the time, notably Darwin’s cousin, Francis Galton. In pursuit of the gene  tells the 100-year story of the development of modern genetics up to the emergence of the present era of molecular biology.

Despite a heroes-and-villains approach, James Schwartz appeals to the practising scientist through lucid descriptions of experiments and their interpretations, and a meticulous avoidance of fictional colouration. The book admirably conveys the serious experimental science carried out at the time (not just gentlemanly observation) and the important by-products including advances in statistics.

In England and western Europe, Galton and others came tantalisingly close to clarifying the properties of genes, particles responsible for the inheritance of traits. Indeed, Darwin in his experiments with snapdragons had the data in front of his eyes, and so did others before and after him. But it was, of course, Mendel working far away in Brno (Czech Republic), who announced in 1865 both the distribution of dominant traits in successive generations and the independence of genes. As Schwartz suggests, Mendel’s brilliance lay in performing a detailed analysis of a simple case, the famous peas, and like many outstanding scientists judiciously ignoring contradictory data. Mendel was certainly troubled by plants that failed to show simple patterns of inheritance, but so confused were the others that Mendel was not positively rediscovered until 1900, and despite the fact that Mendel widely distributed his 1866 paper it remains a matter of debate whether contemporaries, including Darwin, even read the work.

Schwartz is also lucid on the rise of cell biology and the period after 1900, which saw the appearance of laboratory science, notably fruit fly genetics, which explored at depth the properties of genes, their mutations, and the inheritance of the complex traits that baffled 19th century biologists. Interestingly, a recurring theme even into the 1950s was the driving force of eugenics in genetics research, rather than today’s familiar motivation of improved health care.

In contrast to modern molecular biology and genomics, there is little chemistry in the science of In pursuit of the gene, but the volume will enthral any experimentalist. Questions concerning the nature of scientific insight, the motivation required to take on difficult questions and the malleability of the scientific record are issues that affect us all.