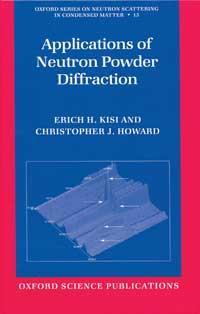 In the Edwardian heyday at the beginning of the last century, when the Braggs, father and son, found that monochromated x-rays were diffracted from powdered NaCl, they not only founded a new field of physics but laid the foundations for an analytical tool that had an immense impact on chemistry. Nearly 50 years later, when Shull observed how a monochromatic beam of neutrons was diffracted from powdered MnO (incidentally having the same crystal structure as the Braggs’ NaCl), the impact was equally momentous. Because atomic nuclei scatter neutrons in what - at least to a chemist - seems a haphazard sequence of atomic number, neutrons illuminate the parts that x-rays struggle to reach: light atoms (ubiquitous hydrogen to the fore) but, above all, the way that magnetic moments are distributed in space - ferromagnetically, antiferromagnetically, ferrimagnetically . the whole panoply of magnetic order.

At least when the neutron beam comes out of a nuclear reactor and is rendered monochromatic by reflecting it off a crystal according to the Braggs’ famous law, powder diffractometers still look much as they did in the Braggs’ time: a detector circling the cylindrical powder sample on an arc. Of course, half a century of effort has improved sensitivity, resolution and, above all, data collection time. The coming of pulsed neutron sources (of which the UK’s own ISIS at the Rutherford Laboratory is current world champion) changed the scene with time-of-flight recording, but still the essence of powder neutron diffraction remains the intensity versus scattering angle. Out of that comes the plethora of information which attracts so many thousands of users to this versatile technique.

It is a tribute to the extraordinary sweep of condensed matter science that the series published by Oxford University Press under that umbrella title should now have reached its fifteenth volume, though a bit odd that this is the first on neutron powder diffraction. The Oxford series has gained a reputation for being authoritative and, as far as the many aspects of neutron powder diffraction are concerned, newcomers will find all they need to guide them in applying the technique to their needs, whether they be magnetism, amorphous materials or stress analysis. For the chemists, however, I have a caveat about the ambiguous word ’applications’ in the title. We chemists thrive on the concrete rather than the abstract. While ’applications’ applies correctly to the many areas where neutron powder diffraction has made an impact, chemists will look in vain for the many specific examples that to me (as a chemist, of course) would have brought the book truly alive. That important enterprise awaits other authors.