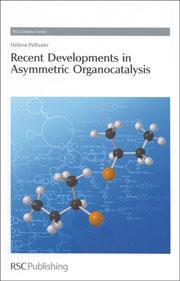 This book forms part of the RSC Catalysis series (Part 3) and deals with developments in organocatalysis from 2008 to early 2009.

Organocatalysis is a highly contemporary area of research in which asymmetric reactions are catalysed by organic molecules.

The author has divided the book into 10 chapters, each individually dealing with different types of organocatalytic reactions, for example, amongst others, nucleophilic addition to C=C, C=O and C=N bonds, cycloaddition, oxidation, and reduction reactions.

Perhaps one downfall of this approach is that it reads rather like a catalogue of reactions and it would have been nice to see mechanistic arguments and details on the origin of asymmetric induction in some reactions.

On balance this book was set out to update the audience on the application of asymmetric organocatalysis after several earlier review articles and this certainly meets the task with a plethora of detailed reports on important asymmetric organic catalysed processes.

This book will appeal to those researchers engaged in catalysis at PhD or post-doctoral level and provides a useful compendium on a wide number of organocatalytic transformations.