Not a scientist: how politicians mistake, misrepresent, and utterly mangle science 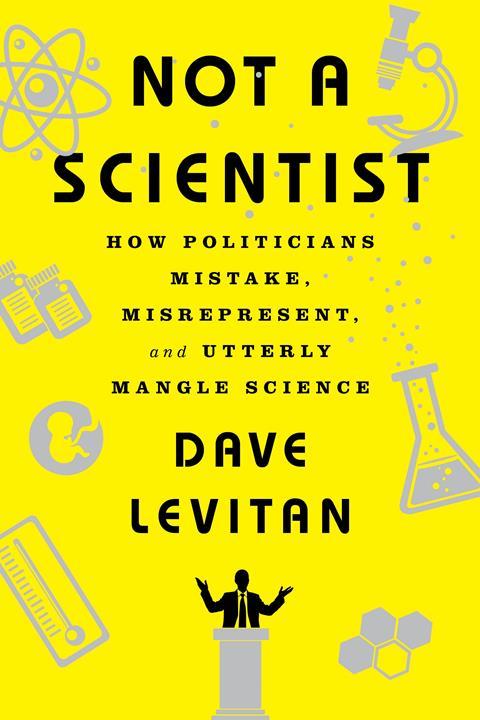 Not a scientist describes itself as ‘an eye-opening tour of the political tricks that subvert scientific process’. The book takes its name from a speech by Ronald Regan in which he stated: ‘I am not a scientist and I don’t know the figures, but I just have a suspicion…’ Regan’s suspicion was that the volcano Mount St. Helens had released more sulfur dioxide than human sources had over the previous 10 years. He was completely wrong. Dave Levitan introduces his book with examples of other politicians using the ‘I’m not a scientist’ dodge to further their own agenda. The author continues to use relevant and digestible anecdotes to describe one technique used by politicians to misrepresent science in each chapter, including the ‘cherry-pick’, the ‘blame the blogger’, the ‘certain uncertainty’ and the ‘straight-up fabrication’. The examples he highlights cover a wide range of issues including the Aids crisis, vaccinations, genetically modified organisms, global warming, space exploration and abortion. The information they provide is compelling and interesting, but the book as a whole feels a bit like a list and the lack of story arc makes it easy to put down halfway through.

It’s also worth noting that most of Levitan’s anecdotes involve right-leaning politicians, making it likely that this book will appeal to a left-leaning, scientifically literate audience. It therefore risks preaching to the choir.

Not a scientist is definitely targeted at an American audience, with almost all the examples coming from US politicians. However, it was written before it emerged that Donald Trump would become president, and he is barely mentioned – so if you feel saturated with news stories criticising Trump you don’t need to avoid it. Nevertheless, the book gives good examples of some of the techniques Trump’s opponents claim he has been using. In the current political climate this content is relevant, even if you are not from the US. As a British reader, however, I would have liked to see more international examples.

At the end of Not a scientist, readers will be better able to recognise the techniques politicians are using to misrepresent science, but this is just the first step to more scientifically informed politics. The book lacks discussion about agency or the role science and politics play in society. Readers will not learn to combine the described techniques and facts with societal, ethical and personal issues to form arguments that are persuasive. Pointing out the use of these techniques alone has the potential to further the dichotomy of ‘us versus them’ or ‘we are right and they are wrong’. Nevertheless it is an interesting read, and should be used as part of a larger toolkit to promote the correct use of science as evidence in policymaking.