Chemistry and biology of ellagitannins: an underestimated class of bioactive plant polyphenols

Chemistry and biology of ellagitannins: an underestimated class of bioactive plant polyphenols 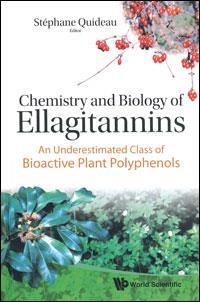 Ellagitannins are the active components of many medicinal plants

Unlike gallotannins, ellagitannins are chemically stable and isolable compounds. Moreover, the connection between adjacent galloyl groups increases the rigidity of the overall structure which may result in a scaffold of chemical functionalities (aromatic nuclei, hydroxyl and keto groups) with well-defined spatial distribution for specific interactions with biological receptors. Consistently, ellagitannins are the active components of many medicinal plants.

This book reviews the huge structural diversity of ellagitannins and their biological and pharmacological activities and describes recent advances in ellagitannin biosynthesis, such as the discovery of plant enzymes that catalyse the stereoselective oxidative coupling of two galloyl moieties.

The two main strategies for the total synthesis of ellagitannins, depending on whether the oxidative coupling between the galloyl moieties takes place before or after installation on the D-glucose core, are discussed. Ellagitannins have been used as lead compounds in the search for new anticancer or antiseptic agents acting through modulation of the immune system.

Because of their presence in fruits (berries) and nuts, investigating the bioavailability and metabolism of ellagitannins after oral ingestion has nutritional significance: ellagitannins are largely hydrolysed into ellagic acid in the gastrointestinal tract.

The final chapter deals with C-glycosidic ellagitannins and, in particular, describes the original reactivity of those compounds which can act as non-conventional benzylic carbocation precursors and stereospecifically react with a variety of natural nucleophiles (thiols, alcohols, phenols). The relevance of this original reactivity in the chemistry of oak-aged red wine is discussed.

In conclusion, this comprehensive and well-illustrated book, which gathers contributions from leading teams in the chemistry and biology of ellagitannins, deserves a wide success.