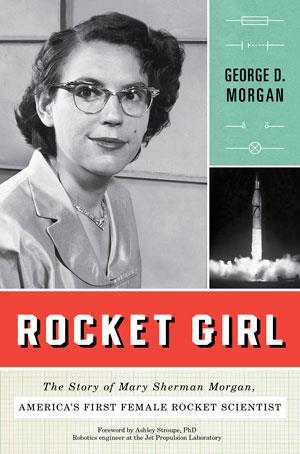 Rocket girl is a book about discovery: the discoveries of Mary Sherman Morgan; the discovery of space; and the author’s discovery of a woman shrouded in obscurity – the mother he barely knew. However, George Morgan’s book is no simple biography – it begins ‘This is a story…’ and it certainly reads like one.

Mary left little in the way of a paper trail; George states early on that he has precious little knowledge of her life before his birth. Interestingly, this is where the book’s appeal lies: in the revelation and the unearthing of what the author calls ‘hidden treasure’. Collecting stories from friends, colleagues and acquaintances, the book has the feeling of anecdotes painstakingly collected and pieced together. The chapters leap from episode to episode, visiting moments in her life, snapshots of stories gleaned from memories.

This jumping back and forth between times and places and different lives, including rocket scientist Wernher von Braun and the author himself, can feel disjointed and in some places slows the pace. The book gains momentum as it progresses, with the leaps occurring more often until the threads of the story begin to knit together. In the shadow of the space race the story comes to life, driving onwards with a new dynamism.

The book’s ‘creative non-fiction’ style generates vivid images for the reader. However, the descriptive prose is occasionally over-embellished; I think George could have achieved the same tone without the sometimes jarring imagery, which detracts from the believability of his narrative. Rather than bringing Mary, with all her character and quirks, back to life, these flourishes instead relegate her back to the realm of anecdote.

With these descriptive passages it’s difficult to work out the book’s intended audience. Personally, I think the writing is intended for a younger readership, but the challenging nature of some of the language might be off-putting for these readers. The in-depth discussions of the science involved seem to suggest the book might suit mature young adults interested in science – a description that also fits its young protagonist.