The rational optimist: how prosperity evolves

The rational optimist: how prosperity evolves 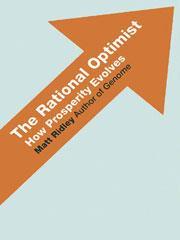 As former chairo f Northern Rock, Matt Ridley should be wary of disasters. However, he is a well-informed science writer, author of books on genetics, the human genome and Francis Crick. He has compiled, aided by acknowledged interaction with others, a history of the human race and its capacity for change. Ridley’s theme is that past predicted catastrophes over nuclear war, overpopulation, pesticides etc have all been overcome, essentially through the sharing of ideas in the collective brain.

Surveying human interactions and population growth over 200 000 years, Ridley traces the emergence of farming, mining and cities. He distinguishes human intelligence evolution by natural selection through cultural rather then genetic interaction. Ridley contends that economic prosperity has been driven by exchange of ideas leading to production and innovation specialisation with consequent consumption diversification. Pessimism from apparent turning points of expected calamities - 1960s global famine, 1970s resources, 1980s acid rain, 1990s pandemics, Y2K etc - would be justifiable but for world response by problem-solving and invention. Global misery - whether blindness from vitamin A deficiency, dysentery from contaminated water, untreated Aids or malaria - he argues, make it immoral to turn off economic innovation. He is still wary of flu pandemics.

Fritz Haber and Carl Bosch are mentioned, but fundamental science is regarded as daughter rather than mother of technology; steam revolutionised cotton production without theories, and lime-juice scurvy treatment preceded
vitamin C chemistry - Ridley does admit that science led to the telegraph, mining geology and dyestuffs. Advocating genetic modification and nuclear power, he decries biofuels, is sceptical about food miles and low-yield organic farming, and hints at catalytic imitation of photosynthesis.