Scale: the universal laws of life and death in organisms, cities and companies 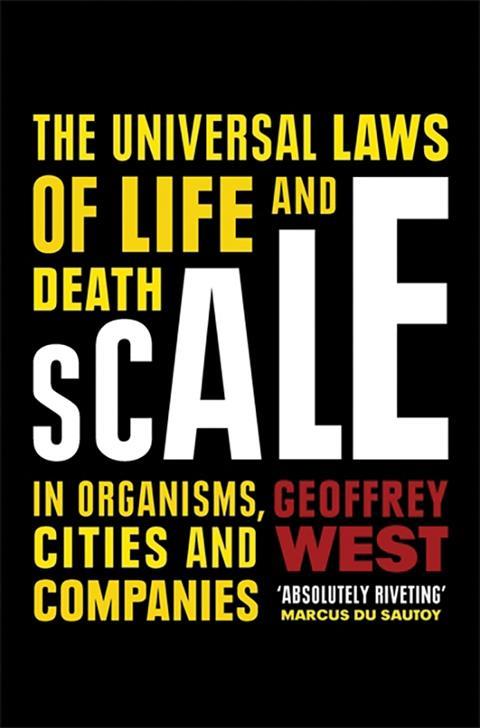 Geoffrey West is a distinguished professor and past president of the Santa Fe Institute in New Mexico. If he had chosen to simply write a book about his own fascinating research on scaling behaviour, and how this simple concept could be applied to break down and understand complex systems of all kinds, then he would have written a very good book. Scale is, in part, exactly that. West presents by chapter an unfolding exposition of the seemingly wildly unrelated threads of his own studies from ecology to economics.

The author has, however, gone far beyond a straightforward account of his own expertise to produce a thoroughly beguiling book. His explanations of scaling concepts seem to grow entirely organically out of the autobiographical stories he tells, interwoven with fascinating historical interludes. There are seemingly few topics West doesn’t cover, from why Isambard Kingdom Brunel’s shipbuilding ultimately failed, to how trees employ impedance matching, and why his lunchtime habits have fostered collaboration. The connections he makes between these disparate threads somehow result in a fascinating and coherent whole.

West has rightly made much of his work on defining a science of cities, concentrating on this theme in his TED talk and highlighting the very basic need for this knowledge. This science is in inherently about people and the future of human civilisation, and Scale is a compelling read as a result. At a time when the expertise of scientists and the utility of science is under attack, West’s pragmatic, grounded and equation-free explanations of physics and mathematics is highly accessible, and a welcome contrast to the traditional and perhaps hackneyed gazing at the wonders of the universe characteristic of pop physics. Everyone should read this book.