Cathedrals of science: The personalities and rivalries that made modern chemistry

Cathedrals of science: The personalities and rivalries that made modern chemistry

The English organic chemist Christopher Ingold once recalled visiting the American physical chemist Gilbert N Lewis at the University of California Berkeley, US, in April 1932. Instead of meeting Lewis in the laboratory, Ingold found him on the beach gutting fish. Despite this apparent lack of engagement, Lewis was an extremely hard-working, iconoclastic chemist whose contributions to thermodynamics, the theory of chemical bonding, photochemistry, and the theory of acids and bases were of fundamental importance and utility. 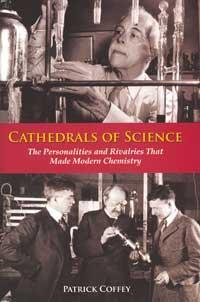 Gilbert Lewis, the American physical chemist (top) with his rivals, including Irving Langmuir (below, left)

Nominated for the Nobel prize 13 times between 1922 and 1944, and receiving serious consideration by the Nobel committee on four occasions, Lewis was nevertheless always rejected.

Patrick Coffey, a former chemical consultant-turned historian, investigates why Lewis failed and why he may or may not have committed suicide in 1946.

Using reputable secondary sources and the archives of both Lewis and his rival, Irving Langmuir, Coffey finds answers in the way physical chemistry developed between the 1880s and 1950s and in the rivalries, professional jealousies, patriotism and bloody-minded spitefulness that often motivated the chief architects and workers of what Lewis described in his influential Thermodynamics (1923) as one of science’s cathedrals: Arrhenius, Nernst, Lewis, Langmuir, Haber and Pauling and a host of less well-known chemists.

While such personal foibles are not unique to competitive scientists, they seem to have been particularly rife among physical chemists, and exacerbated by the Nobel prize system.

Coffey has a judicious eye for anecdotes. I liked the story of Nernst and Kelvin shutting themselves in a dark room with Madame Curie to view radium’s glow, only to be surprised by a suspicious Lady Kelvin.

However, Coffey’s main purpose is to display the moral and social issues that underpin the emergence of twentieth-century chemistry. The result is a gripping page-turning narrative that elegantly combines popular science with a serious history of science.