The aura of arsenic

Is arsenic an aphrodisiac?: The sociochemistry of an element

Is arsenic an aphrodisiac?: The sociochemistry of an element 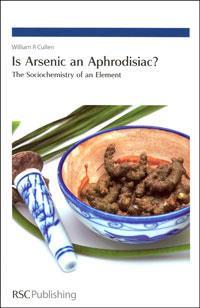 Some arsenical preparations have been used in Chinese medicine

Because so much has been said and written about arsenic, it may now be safely said that this element is inextricably interwoven into our social fabric. In fact, the mere mention of the A word conjures up images of Agatha Christie novels, acts of malevolence and other deeds most foul.

But is arsenic as bad as its reputation? Although there can be no doubt that in general arsenic compounds are seriously toxic, in a number of its combined forms the element is not toxic at all. Moreover, arsenic is not the most toxic among the elements and is certainly no match for a number of other elements such as mercury, polonium and thallium. The arsenic compound most frequently adopted as a homicidal agent is the trioxide since even a few milligrams can induce severe symptoms in humans. The fatal dose is however much higher - at least 100mg -and recovery from doses even as high as 10g have been recorded. This is possible because injested inorganic arsenic is metabolised within the body to dimethylarsinic acid which is eventually eliminated in the urine. Poisoning with arsenic leads to a variety of chronic conditions that include enlargement of the liver, some forms of cancer, birth defects in the unborn, and cardiovascular problems such as stroke.

Does arsenic have any mitigating benefits for humankind? The much prized mineral waters found in spas often contain at least some trace of arsenic. In Baden-Baden (Germany), for instance, the springs were once described as producing ’arsenical water’. Drinking such water is thought to be beneficial for several common medical conditions such as arthritis, rheumatism and skin diseases. Medications containing arsenic have been used frequently in the past and some are still in use today. Thus, the arsenical compounds salvarsan and neosalvarsan were regularly used in the treatment of venereal diseases before the advent of penicillin.

Today, because malignant cells are known to be highly sensitive to arsenic, various arsenicals are employed to treat certain types of leukaemia, especially those types that do not respond to front-line therapy. Currently, it is widely accepted that the benefits of arsenicals administered in comparatively low dosages often outweigh their toxic side effects.

The answer to the question posed in the title of this book is that there is only anecdotal evidence that arsenic is an aphrodisiac and it is definitely not recommended for this purpose by the World Health Organization.

This work fits the fashionable trend of devoting an entire book to one specific element, taking a long and hard look at the sociological, cultural, medical and even to some extent the chemical importance of this element. It makes for highly entertaining reading not only because it has been so extensively researched but also because it succeeds in coming up with a host of fascinating and often little-known facts about arsenic. For anyone having even the slightest interest in arsenic this is an absolute must!